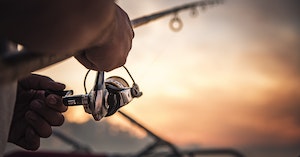 Angry Mob Descends On Cheating Fishermen Who Stuffed Fish With Weights—‘Call The Cops!’ 

The sport is much more serious than the casual viewer would think at first glance — with some competitions reeling in millions for the winners (pun intended). This also means that there is a significant incentive for competitors to cheat as well.

Some examples of past cheating in fishing competitions include the original winners of the 2016 White Marlin Open forfeiting the $2.8 million prize and two other men from Utah were charged with multiple misdemeanors and felonies after bringing bass from another body of water to a competition.

This latest scandal comes after the Lake Erie Walleye Trail tournament in Cleveland, Ohio came to a dramatic finish last Friday. Jacob Runyan and Chase Cominsky are the two men who now find themselves at the center of a police investigation after the five fish they brought in for a weigh-in came to a combined 34 pounds — while the tournament director, Jason Fischer, had eyeballed them at a mere 20 pounds.

According to the article from the Washington Post, “Fischer grabbed one of the fish, ran his hand over its stomach and squeezed. He felt something hard — too hard. Fischer sliced open the dead walleye and plunged his hand into its flesh. He rooted around until he found what he hoped he wouldn’t find.”

The director called out, “We got weights in fish!” and they were definitely sizable: between the five fish, there were 10 steel-gray, egg-sized weights and bits of dead fish that had been added to the weigh-in fish.

There were 64 other pairs of fishermen in the competition, and after Fischer’s announcement, Runyan and Cominsky found themselves being confronted by an incensed mob who were understandably furious about their attempt to cheat.

And this apparently isn’t even the first time Runyan and Cominsky have been accused of cheating — the pair had been disqualified in 2021 from the Lake Erie-based “Fall Brawl” after one of the pair failed a lie detector test, and now there are questions revolving around their previous 2022 wins that had put them in the running for the “Team of the Year” award.

Ultimately, of course, the pair were disqualified from winning close to $30,000 in prize money, which went to Steve Hendricks and Brian Ulmer instead.

Both wildlife officials and law enforcement are now conducting an investigation into the disqualified pair of fishermen, and they could be facing criminal charges for their actions in the competition.