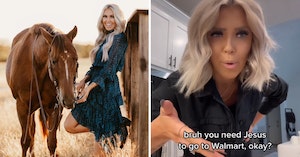 An online grifter seems to be pivoting away from the “fitness influencer” scam after being sued by the state of Texas for deceptive business practices and into Christianity, judging by her latest videos. According to BuzzFeed News, Instagram user Brittany Dawn Davis has been forced to apologize for what she calls “mistakes” after multiple customers, including a group of clients with eating disorders, filed formal complaints against her, leading to the lawsuit.

The customers have complained that Davis presented herself as a fitness expert and coach who would send you private, personalized tips for your workout and diet plan to the tune of up to $300 per month. Instead, many customers said they compared notes and found that they had all been given the exact same plans by Davis and only received “generic and non-substantive” advice literally saying things like “you’ve got this babe.”

Worse, her customers who have eating disorders say she claimed to have special training on the topic and would be able to help them without contributing to their issues. However, one woman with a disorder around calorie restriction said that Davis sent her a diet plan with a “significantly lower” calorie intake than she had been consuming after asking the influencer to help her increase the amount she eats.

It eventually got so bad that Davis posted an apology video on YouTube in 2019, which has since been deleted, and took down her website before going on Good Morning America and claiming to have taken “full responsibility” for what she called a “mistake” and claiming to have made things right. Whatever she did (and it’s possible that it was nothing), it doesn’t appear to have stopped her from getting sued by the state for between $250,000 and $1 million in damages for being a big liar and making people’s eating disorders worse.

Now that she’s learned that there are real consequences for false advertising and screwing over customers looking for substantial results, Davis appears to be transitioning into a grift that truly requires no expertise or results at all — Christian fellowship.

“Fitness and health are no longer my identity. My identity is in Christ,” she reported in a late 2019 video. “You guys know that I went into a season of hiding when everything happened […] I heard [God] say, ‘Stop trying to hide what I’m using.'”

Her website is now promoting a women’s gospel retreat that claims will be “showing there is freedom in imperfection + peace in your broken pieces through sisterhood and Jesus.” Tickets are going for $125 a pop which does not include lodging at the hotel, but will buy you a single dinner (other meals can be purchased at local food trucks), access to their coffee cart, and the opportunity to drop more of your hard-earned cash on their vendors.

Davis is such a well-known scammer that she has an entire subreddit dedicated to keeping tabs on her latest grifts, tracking all the times she promoted things like QAnon conspiracy theories. The news about the Texas lawsuit has them all kinds of excited right now.