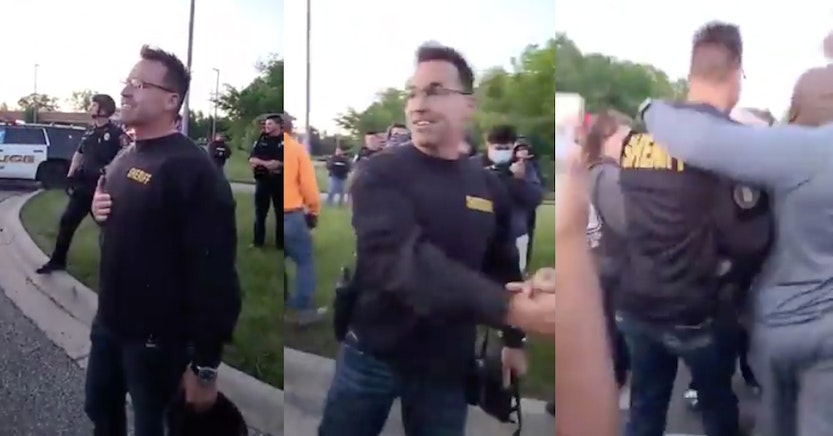 Peaceful protests across the United States have brought communities together to march in solidarity against police brutality against the Black community, and specifically, seeking justice for the recent death of George Floyd while in the custody of Minneapolis police.

Many of these events have seen police take a stand against protestors, leading to violent clashes and arrests. But a handful of police departments have taken a different approach, opting instead to stand with the protestors and support their quest to push back against corruption.

In Flint, Michigan, Sheriff Chris Swanson ordered his officers to put down their batons and helmets and instead, by request of the protestors, march with those gathered.

“The only reason we’re here is to make sure that you’ve got a voice. That’s it,” Swanson said. “Don’t think for a second that [Derek Chauvin] represents who these cops are from all over the county and around this nation. We go out there to help people, not do that nonsense.”

Swanson asked the protesters what they wanted from the cops, and, in response, they began to chant “walk with us.” And so they did.

As a result, the images captured from Flint’s march provide a stark contrast to many of the images we’ve been seeing from other protests with cops who weren’t there to serve their communities.

And Flint wasn’t the only city where police officers decided to stand with protesters instead of against them.

Many praised Swanson for doing the right thing.

Though some remain cynical.

No matter your take on Swanson’s tactics or motives, the outcome was still vastly different from that of many other cities’ protests over the weekend — he told reporters there were no reports of property damage and no arrests made.

“We can’t forget, on all our police cars across the nation, it says, protect and serve,” he said. “That means all people…share the same dignity.”