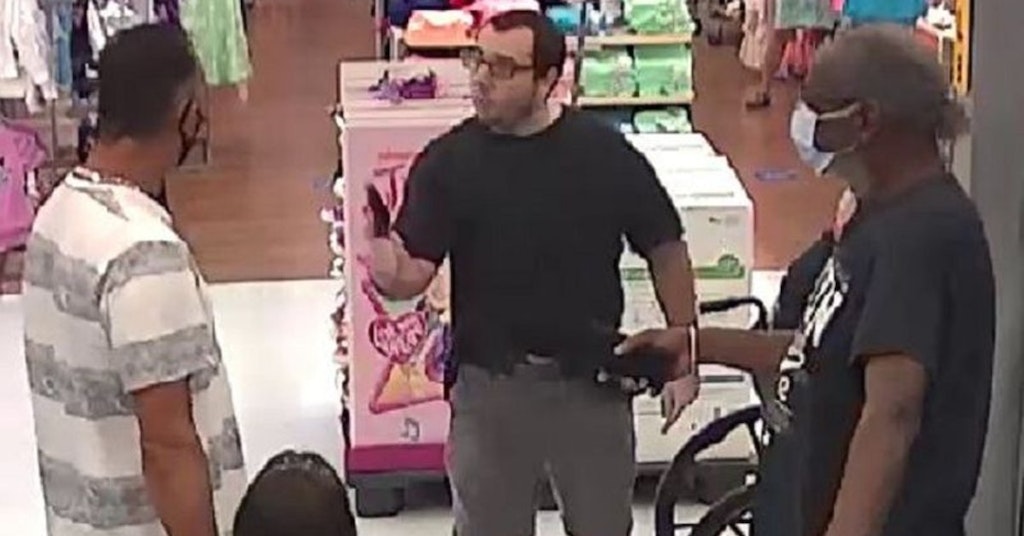 Confrontations between anti-mask and pro-mask individuals continue to escalate across the U.S. as tens of thousands test positive daily and more local governments and retailers have issued mask requirements. In Florida, an unmasked man pulled a gun on a fellow shopper who asked him to put on a face covering in a Walmart, where masks will be mandatory starting on July 20.

The incident was caught on the store’s security footage and images from the video quickly went viral.

He wouldn't wear a mask inside the Palm Beach County Walmart, but he was wearing a gun on his waistband, and he pulled it on another shopper who was wearing a mask. https://t.co/W1pxfZWQXu pic.twitter.com/31GVNq34VU

The unmasked man, who was pushing an elderly, masked individual in a wheelchair, reportedly gave the finger to the man who confronted him before pulling the gun he was openly wearing on his waistband and threatened to kill him in front of the young girl he was with. Thankfully, he did not pull the trigger and left the store without hurting anybody.

In response, the Palm Beach County Sheriff’s Office posted the image of the maskless man to Facebook, asking for the public’s help in identifying him. According to a recent update, they were successful.

“The suspect has been identified and is cooperating with the investigation,” sheriff’s office spokeswoman Teri Barbera told the South Florida SunSentinel. “The investigation is still open and active.”

Authorities did not release the man’s name or state if there were any charges being issued against him. However, he reportedly drove off in a white Chevrolet Equinox.

This story quickly became a national representation of what is being called a “culture war” between Trump supporters and other conservatives and more liberal individuals who are in favor of mask requirements. Although this incident didn’t end in direct violence, a Michigan anti-mask man stabbed a 77-year-old who asked him to put on a mask. The unmasked man, identified as Sean Ernest Ruis, was then killed by a responding police officer.

These incidents have people worrying that July 20 is going to be a scary day for Walmart shoppers and employees.

Are all the unmasked crazies going to come packing when Wally demands everyone mask next week 7/20 ? I feel for the underpaid “Health Ambassador” that will have to deal with these unreasonable, insane freaks all day.

This is the next level we are headed to. It’s getting scary out there. #WearADamnMask @SethMacFarlane https://t.co/oOHiJXW9ZH

I wonder how much Walmart will pay the people who have to enforce their new mask rule?

Every Walmart and Sam’s needs an armed security guard or 2. If fighting a pandemic isn’t enough. Good grief.????

As if I need any more reasons never to go to Walmart.

This kind of stupidity will continue on the rise for months from the fool Mask Slackers, maybe longer. Be careful about who you run your mouth at. Idiots will be idiots.