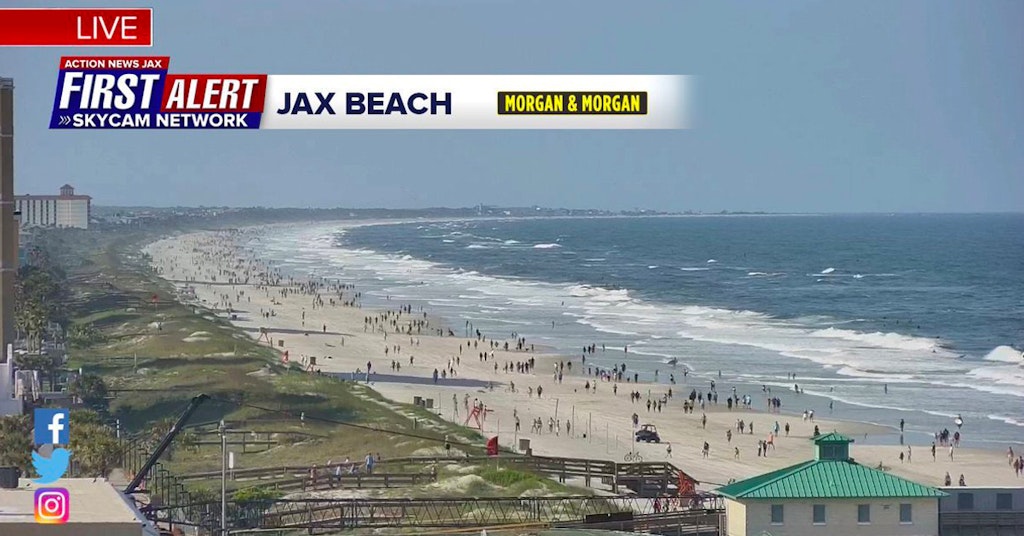 It seems like just yesterday Florida shut down public spaces and beaches, probably because it’s been barely a blink since the state joined the movement to flatten the curve. Despite having an enormous population of elderly and infirm people, Gov. Ron DeSantis decided on Friday that enough was enough and a little pandemic wasn’t going to keep anyone from partying. Beaches were opened in Jacksonville and were immediately flooded with idiots.

Jacksonville Mayor Lenny Curry stated that the beaches were only open to “essential” activities, according to Mic, meaning run, walk, fish, bike, swim, and surf. So I guess you can do anything except dog pile strangers? Folks are still being asked to maintain social distancing guidelines, but the picture of the beach as it reopened doesn’t make it seem like anyone is behaving with much restraint:

Duval County, where Jacksonville is located, was one of the last beaches to close and is now the first to reopen. Official open hours are limited to 6 a.m. to 11 a.m. and 5 p.m. to 8 p.m.

“This can be the beginning of the pathway back to normal life,” Mayor Lenny Curry said in a statement. “Please respect and follow these limitations. Stay within the guidelines for your safety as well as for the safety of your neighbors.”

If Florida were the only state in the U.S. making decisions, this all might not be so bad. But every state is making different decisions about the stay-at-home orders, with very little support from the federal government. Donald Trump has gone back and forth on who gets to decide when things will “go back to normal.” On Friday, he practically called for certain states to secede from the union on Twitter just so that they could shop at outlet malls again. It’s not surprising that there isn’t a cohesive plan for how to safely conduct ourselves in a pandemic.

COVID-19 doesn’t actually know about state lines, unfortunately, so pictures like this of people gathering have naturally upset folks who don’t want their loved ones to get sick and die:

Thanks, dipshits. See you in phase 87. Actually, I probably won’t. #floridabeaches https://t.co/fyqCb2boXJ

It's over for us hoes https://t.co/TKx5c6PvuQ

There’s a reason we made Jason Mendoza be from Jacksonville. https://t.co/z5tatsqYja

Florida is still not condoning groups of 50 people or more, but they have opened their parks again along with the beaches. And the golf courses. Maybe Trump will take a trip down to Mar-a-largo soon?