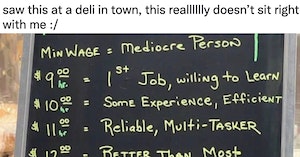 A sign denoting what it will take to make certain wages at a Jason’s Deli in Melbourne, Florida, is igniting another fierce debate about inequity in the United States.

@HaitianDvorce posted a photo they took outside of the restaurant, which featured a sign saying the franchise is now hiring for all positions, but the rates and explanations that followed were pretty awful.

It started by saying that employees will get minimum wage if they’re “mediocre” people — that’s currently $8.65 an hour in Florida, although it’s scheduled to increase at the end of September.

From there, it sounds as if the deli is willing to offer $9 an hour to first time workers. Other highlights include requiring someone to be “better than most” with “zero drama” and to “[work] like 2 people” if they expect to make $12 an hour, offering $14 an hour to someone who is “never ever late” and cares about the work as much as the owner, and finally topping out at $15 an hour for someone who “out shines & out performs the owner.”

Someone making $15 an hour, 40 hours a week, can expect around $31,200 yearly salary before taxes, whereas someone pulling in $9 an hour full time would be hitting around $18,700 before the government takes its cut. The former seems highly unsuitable for someone who is putting in more work with more success than the owner, while the latter doesn’t seem livable in just about any situation.

With the ever-increasing income disparity in the United States brought on at least partly by rich people refusing to pay fair wages, seeing something like this laid out so plainly was upsetting to a number of people.

The part about expecting an employee who makes an hourly amount equivalent to what many are fighting for the minimum wage to be in the country to work even harder than the person raking in all the restaurant’s profits was particularly galling.

Naturally, there were also plenty of people in the comments defending the owner with no further context, because they apparently don’t believe that people in food industries deserve a living wage. Get a different job if you don’t like it, these folks always say.

And now restaurants across the country are understaffed because people have been doing exactly that — refusing to work to the bone for companies that don’t compensate them fairly. It’s almost like these are necessary jobs after all and people should be paid fairly for their labor, rather than working “like 2 people” for just $12 an hour.