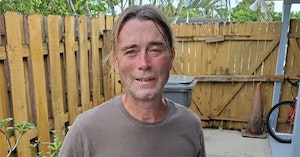 What should have been a feel-good story took a weird turn when a man saving a neighbor’s life was told to move from the yard where he was valiantly working, literally told by the property owner to “have him die somewhere else.”

The Palm Beach County Sheriff’s Office heralded a local hero, via its Facebook page, that came to a neighbor’s rescue. The man, identified only as “Tony,” saw the driver of a car suffering a seizure while the car was still rolling.

As the Sheriff’s Office depicted it, “Without thinking twice, Tony ran up to the rolling car on Dunes Road and grabbed the fender to try and stop it from rolling down the street further. It ran over Tony’s foot, but thankfully he had steel-toe boots on!”

The car eventually stopped on the lawn of a house that would soon prove to be bad luck. The Facebook post relayed that the “windows were up and the doors locked. The driver was convulsing and was in terrible shape.”

When Tony called for help, the owners of the house emerged, but literally said, in grumpy old man fashion, “Get off our lawn,” and then, more callously, “Get the man out of here, have him die somewhere else.”

The Facebook post, trying to keep it positive, depicted that as “a very sad moment for Tony, but he kept at it!!”

But then Tony realized he knew where the injured man lived, ran down the street to that house, got his wife, and called 911.

Facebook commenters praised his heroism, but also expressed outrage at the people who suggested the man who had the seizure needed to “die somewhere else.”

“This is a great example of ‘LOVE THY NEIGHBOR,'” said one commenter, getting Biblical. “Those neighbors who told him to get off their property and let their other neighbor die someplace else need to seek forgiveness from both their neighbors and their maker.”