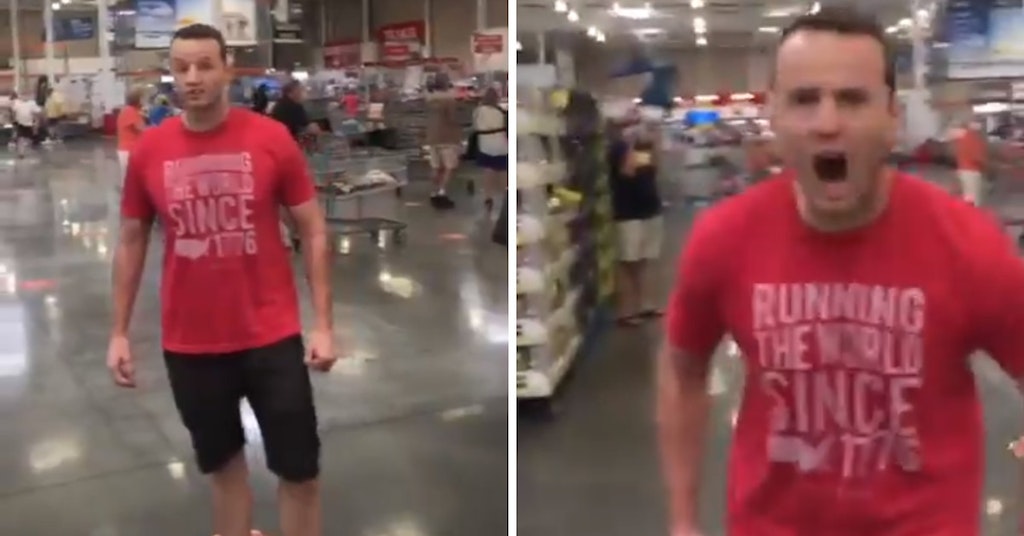 
Another individual had to be kicked out of a Costco after he refused to wear a mask, but not before he threatened an elderly woman. Video posted by documentary film director Billy Corben shows a man in a shirt with an image of the U.S. and “running the world since 1776” on it aggressively advancing on the video-taker while shouting “I feel threatened” and “back up.”

Florida man at Fort Myers Costco in "Running the World Since 1776" shirt flips out on elderly woman who asked him to wear a mask and man who defended her #BecauseFlorida (via @profjaffar) pic.twitter.com/PDOvi33qHK

“I’m not harassing you,” the individual says as the audio starts to cut out and the imperialism fan starts to approach. “You’re coming close to me.”

“I feel threatened!” the maskless man shouts as he advances. “Back up! Threaten me again! Back the f*** up or your f***ing phone down!”

According to Corben, Costco employees escorted the man out of the store and took care of the other customers.

Ignorant Florida man without mask screams and spreads spit at elderly woman who asked him to please wear a mask and the man who defended her because “he feels threatened!” #COVID19 #COVIDー19 #coronavirus

“To give Costco the credit, they escorted him out and made me wait inside and monitored him until he left and then they send someone with me to the care to make sure I’m okay,” said one customer. Corben also tagged a local professor in the video tweet.

The video has gained over 5.5 million views since Corben posted it late Monday. Though the situation played out without escalating to physical violence, multiple commenters believe he was likely carrying a gun and was ready to use Florida’s notorious “Stand Your Ground” law as a defense.

Yup that’s why he screamed “I feel threatened” trying to set the scene. What an Asshole!!

Others are calling on Costco to revoke the man’s membership and are generally tired of people like this.

Isn’t Costco a membership big-box store? Costco could and should revoke his membership and bar him for life from their stores. Then maybe he can learn a little civility while he rues the day he acted the ass inside Costco.

An aggressor with veins popping and hands fisted saying “I feel threatened” while trying to start a fight and obviously not feeling the least bit threatened?

That Costco "I FEEL THREATENED" jackass is the entire Trump 2020 campaign. pic.twitter.com/spAyvfu58P

Many on Twitter are also reporting that the man has been identified and fired from his job at a local Allstate insurance office. His boss, Charley Todd, tweeted that Allstate will be releasing a statement on his dismissal soon.

Thank you to everyone for their comments and messages raising awareness about a former employee at Ted Todd Insurance. He absolutely does not represent our values and no longer works at our agency. We are working with Allstate to release a statement shortly. Wear a mask. Be love