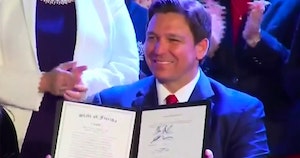 Florida Is Now Banning 40% Of Math Textbooks For Being Inappropriate

Florida Commissioner of Education Richard Corcoran announced on Friday that the state’s Benchmarks for Excellent Student Thinking (B.E.S.T.) standards had resulted in the banning of a bunch of math textbooks. Because they’re scared of Critical Race Theory, or CRT.

“The approved list followed a thorough review of submissions at the Department, which found 41 percent of the submitted textbooks were impermissible with either Florida’s new standards or contained prohibited topics – the most in Florida’s history,” Corcoran said. “Reasons for rejecting textbooks included references to Critical Race Theory (CRT), inclusions of Common Core, and the unsolicited addition of Social Emotional Learning (SEL) in mathematics.”

The department announced, “The highest number of books rejected were for grade levels K-5, where an alarming 71 percent were not appropriately aligned with Florida standards or included prohibited topics and unsolicited strategies. Despite rejecting 41 percent of materials submitted, every core mathematics course and grade is covered with at least one textbook.”

Critical Race Theory has become a talking point for GOP candidates and their mouthpieces, stirring up a racist panic about the idea of children and young adults being taught the honest history of this country. Corcoran has really been at the front of that, saying in December in a press release from Gov. Ron DeSantis that “our classrooms, students and even teachers are under constant threat by Critical Race Theory advocates.”

He has the full support of the governor, who also fears CRT and now math, apparently.

“I’m grateful that Commissioner Corcoran and his team at the Department have conducted such a thorough vetting of these textbooks to ensure they comply with the law,” said DeSantis.