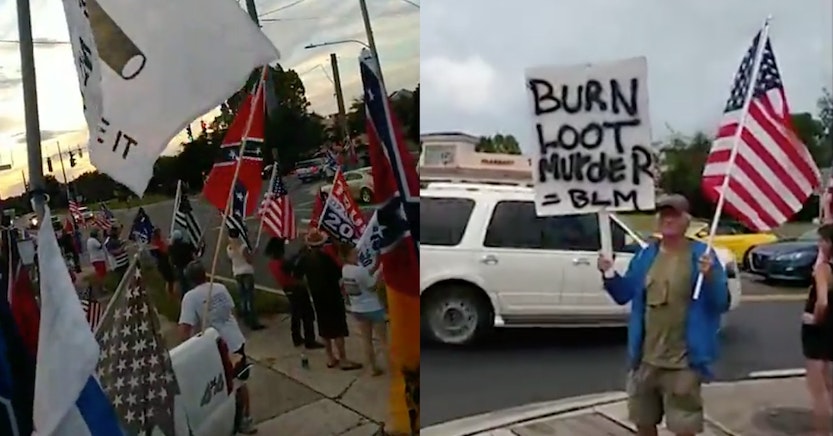 According to TMZ, only four Black Lives Matter protestors stood at the corner while Eddie Dorman live-streamed from the Trump supporter side of things for hours, ranting at and about the BLM movement for whatever white pride audience was watching on Facebook.

Another highlight has Dorman filming an array of Confederate flags while insisting there’s no room in this country for racism — that is, he’s accusing BLM protestors of racism.

“Every one of you’s racist,” he says. “You’re racist against my white heritage.”

The live-stream, which went on for hours over the course of several videos, features a number of incidents like that, with the counter-protestors doing everything from accusing BLM of being terrorists, complaining about George Soros, and offering up veiled threats from a safe distance.

The clash hasn’t gotten much attention online, with most folks likely uninterested in watching hours of footage of people waving around Confederate flags while calling others racist.

But any attention it has received has mostly consisted of eye-rolls and questions as to what exactly “white” heritage is.

America! Where people calling themselves patriots protest the idea that Black lives matter by waving around Confederate flags. You can’t make this stuff up.