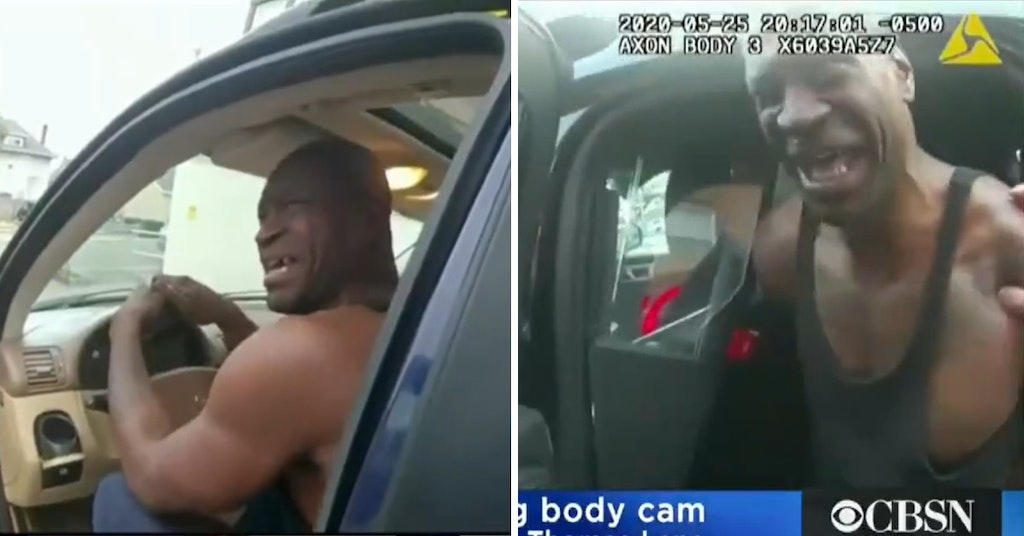 Warning: The following footage is disturbing

The murder trial of former police officer Derek Chauvin has revealed body camera footage previously unseen by the general public showing George Floyd before he was pinned to the ground with Chauvin’s knee on his neck for nearly 10 minutes. The video shows one of the officers pointing a gun at him as he sits in his car with his hands on the wheel as instructed, begging them not to shoot him.

“Please don’t shoot me, please, man… I just lost my mom,” he says at one point.

The arrest was over the accusation that Floyd had paid for a convenience store purchase with a counterfeit $20 bill, a minor offense that does not carry the death penalty.

The following footage may be distressing to some viewers.

As police begin to pull Floyd out of the car, he can be seen weeping in terror as he continues to beg them not to shoot him. He begins to get out of the car hesitantly, but when he doesn’t do it fast enough, Officer Thomas Lane forcibly yanks him out and appears to wrench Floyd’s arms painfully behind his back while claiming that he’s “resisting” and handcuffs him while Floyd sobs.

Later in the footage after Lane questions the others who were in the car when the police arrived, Floyd can be seen saying that he is severely claustrophobic and is scared about going in the back of the police vehicle, where he would be confined and unable to escape. He even begs one of the officers to stay with him because he’s so terrified. After searching him, Floyd resists getting into the cruiser, expressing a deep feeling that he’s going to die as well as bringing up COVID-19.

One of the officers promises to roll the window down, but this is not enough to calm Floyd’s fears.

“I’m claustrophobic and I got anxiety, I don’t wanna [unintelligible],” he says. “Man, I’m scared as f— man.”

Floyd appears to try really hard to work with the officers over his anxiety, saying he’s going to count to three and then go inside. As another officer begins to get angry and shout at Floyd rather than giving him the time and space he needs, Lane goes around to the other side of the car to try and pull Floyd inside as he pleads and screams in terror, saying he can’t breathe. Breathlessness is a common symptom of a panic attack.

Floyd simply can’t stand being in the police car and pushes himself out of Lane’s side of the vehicle, saying he just wants to lay on the ground instead as officers violently struggle with him. Floyd becomes increasingly distressed, crying out again and again and repeating that he can’t breathe.

Commenters have described the footage as “incredibly hard to watch” and many sympathize with Floyd, understanding how terrifying police interactions can be.