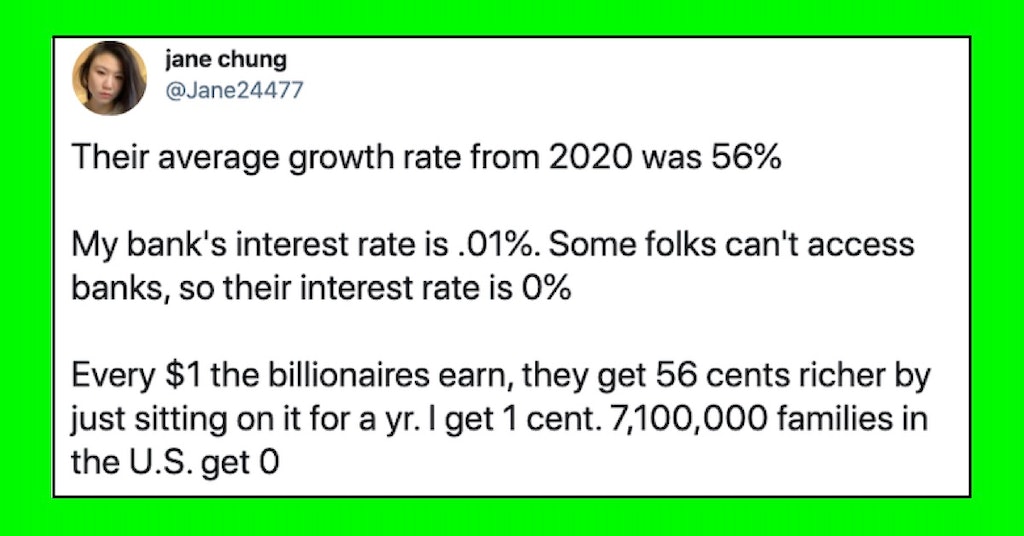 Most people would say the year 2020 was one of the worst in their lives personally and the worst ever experienced by this generation, but they would not be talking about anyone on the Forbes’ 35th Annual World’s Billionaires List.

The list contains the usual players, like Jeff Bezos and Mark Zuckerberg, Bill Gates, and Elon Musk. There were also new billionaires and huge spikes in wealth for the top moneymakers. Why? Because as other people got poor, got evicted, and literally died, these dudes raked in cash.

A Twitter user named Jane Chung was so affected by what they read in Forbes, they created a thread that went super-viral explaining why it’s so messed up that billionaires are profiting off global tragedy.

“I cried looking at the new Forbes billionaire list so I did a bunch of number crunching (as I do) to calm down. First, let’s say this loud and clear,” Chung wrote. “COVID-19 has been a boon for the rich. Founders, families & CEOs of the five Big Tech companies are now worth $651,800,000,000.”

Chung tried to make some comparisons to help conceptualize how much money that is, because the human brain isn’t really built to understand such huge numbers.

For stats, Chung mentions that Big Tech billionaires could end global hunger. TWICE, and that’s not all. They could eradicate malaria, end U.S. homelessness, and add the famine in Yemen on top of that, then split the remainder eight ways and still each walk away with $20,000,000,000. Each.

Chung has an answer to anyone who claims these billionaires “earned” their money. Without even mentioning that these people could not possibly earn this amount of money on their own labor, only by siphoning the value of other people’s labor, Chung explains that they could still give away $139,300,000,000 and be just as rich as they were a year ago. That’s how much they’ve made on the world’s suffering.

“So I guess the moral of the story is, don’t you ever let your government tell you it doesn’t have enough money to feed & house & heal your people. They are liars, and if they had enough courage to stand up to a few rich people, we would all live in a tremendously better world,” Chung says.

Then concludes that this means we should tax the rich.

If you aren’t a billionaire and you disagree, please know this deep in your heart: you will never be a billionaire. Not even Forbes thinks so, and they define a “self-made billionaire” like this:

Forbes uses the term “self-made” as a contrast to “inherited” and “inherited & growing;” it’s not meant to indicate that someone created a billion-dollar fortune all on their own. To achieve such a feat takes teamwork.