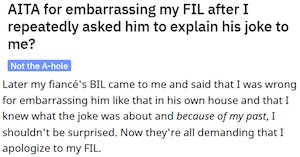 Former Escort Embarrasses Father-In-Law By Asking Him To Explain Gross ‘Joke’ About Her Past, Asks AITA

A woman looking forward to getting married and having a child with her fiancé has polled everybody’s favorite Reddit forum, “Am I The A–hole,” to find out if she was wrong to embarrass her future father-in-law after he made a “joke” about her past. The Reddit user was formerly a full-service sex worker, which is the term preferred by sex workers to describe those who provide a full range of sexual services for their clients, while she was in college and trying to build a life for herself.

There is absolutely nothing wrong with this kind of work, but much of our society still sees it as somehow amoral because of persistent and ancient prejudices against sex workers because we still seem to view sex as something bad and wrong, because we’re weird. Therefore, when the OP’s fiancé’s family found out about her former work, they got all uptight and weird about it, even though she no longer performs those services professionally.

“After that there was a span of 3-4 months in were my MIL and some of my fiancés aunts and cousin ‘police’ their husband when I was around, it was really weird tbh because this dudes were like 40-60yo and I wasn’t that desperate, so my fiancé shut their bulls–t hard and even when his family still gives me the side eye from time to time, we thought it was behind us.”

Clearly it’s not behind the family, as her future mother-in-law actually took her aside when they announced her pregnancy to ask her if the baby was really her son’s child. This is not a normal thing to do, and it’s obvious that the family still assumes she must be a cheater because she was a sex worker in the past, even though those two things have nothing to do with each other.

Still, the OP was willing to let that go, but reached the end of her patience when her father-in-law suggested the same thing with a tasteless “joke” regarding a family birth mark.

“…then he said ‘But how can we know from who he got it?'” she wrote. “‘[I]t may as well be from me, my boy or my brothers’ and he and his brothers began to laugh. My fiancé got mad and before he could say anything I said ‘I don’t get it’ and my FIL was ‘yeah because it runs in the family’ and I said again ‘I don’t get it, why would he get it from you?’ and he began to get nervous and said ‘because you know… it’s just a joke OP’ and I said ‘but I don’t get it and you all laughed, explain.'”

This is a classic tactic that has been suggested by people online in the past for dealing with “jokes” based in bigotry. Pretending not to understand the joke and asking the teller to explain creates discomfort by forcing them to confront the bigotry inherent in the supposed humor and either admit it was a harmful thing to say or expose themself as, shall we say, an a–hole.

The response to the OP’s skilled and effective use of this strategy further exposed her fiancé’s family’s own bigotry, showing that they would rather treat her badly than confront their own prejudices based on someone’s old job.

“Later my fiancé’s BIL came to me and said that I was wrong for embarrassing him like that in his own house and that I knew what the joke was about and because of my past, I shouldn’t be surprised.”

Reddit has clearly voted the OP to not be the one in the wrong in this situation, with some pointing out that the family’s behavior constitutes sexual harassment.