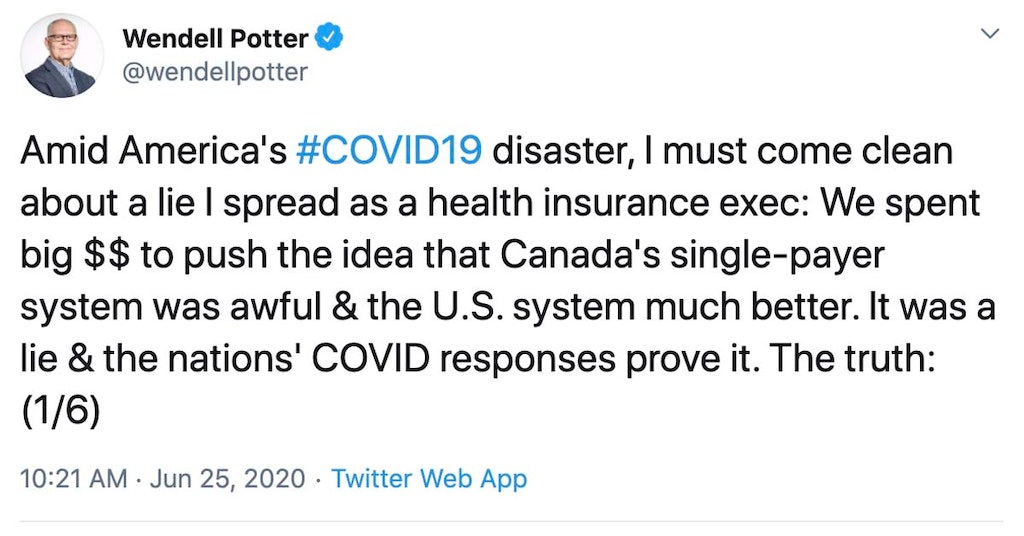 The coronavirus is more than a pandemic: it’s a bright spotlight on the issues plaguing every social system in the U.S. Maybe none are as nakedly exposed as our failing healthcare system, which struggled for months to even conduct basic testing.

Now, as the rest of the world has started to lower their COVID-19 cases, many areas in the U.S. are experiencing a second surge of infections. At the same time, people are still unemployed or losing their jobs as the threat of a double-dip recession looms. Since many people’s health care is tied to their employment, that means even more uninsured people getting sick.

It’s pretty hard to get the country functional and healthy again when its citizens are afraid of bankrupting themselves with a hospital stay. And yet, many people fight universal healthcare and not just politicians. Why? Because they’ve been fed a steady stream of misinformation about the quality and service of that health care by lobbyists from pharmaceutical companies and others who have a vested interest in the system as it stands.

Wendell Potter worked two decades in the health insurance industry, Upworthy reports, first for Humana and then for Cigna. On Thursday, he admitted in a thread that part of his job was spreading lies about Canada’s single-payer system:

Amid America's #COVID19 disaster, I must come clean about a lie I spread as a health insurance exec: We spent big $$ to push the idea that Canada's single-payer system was awful & the U.S. system much better. It was a lie & the nations' COVID responses prove it. The truth: (1/6)

“I must come clean about a lie I spread as a health insurance exec: We spent big $$ to push the idea that Canada’s single-payer system was awful & the U.S. system much better,” he wrote. “It was a lie & the nations’ COVID responses prove it.”

He continued, “The truth: Canada’s doing much better than the U.S. when it comes to #COVID19 testing & treatment. On a per capita basis, more Canadians are being tested & fewer getting sick & dying. This may shock Americans who still believe the lies I told about the Canadian health care system.”

Here’s the truth: Our industry PR & lobbying group, AHIP, supplied my colleagues & me with cherry-picked data & anecdotes to make people think Canadians wait endlessly for their care. It’s a lie & I’ll always regret the disservice I did to folks on both sides of the border. (3/6)

Remember, in Canada there are no co-pays, deductibles or co-insurance ever. Care is free at the point of service. And those laid off in Canada don’t face the worry of losing their health insurance. In the U.S., millions are losing their jobs & coverage, and scared to death. (5/6)

He explained that lobbying groups created by his industry, health insurance, who used cherry-picked data to create the picture they wanted, tricking Americans into believing that getting treatment in Canada meant waiting for ages and that taxes were astronomically higher.

But he points out that “In Canada, no one gets turned away from doctors due to lack of funds. In America, exorbitant bills are a defining feature of the system.”

My wording above may have been unclear, so I want to clarify: I’m not *currently* an insurance exec. I left in 2008 when I finally developed a conscience. Since then, my mission’s been to expose & reform this awful system. Please consider supporting @M4A_NOW so we can save lives.

He signed off by encouraging people to support Medicare for all.

Is this message too little too late? I supposed it depends on if the right people see it, but Potter and his colleagues have definitely made the world a worse place. His thread did open up discussion about healthcare in both countries that will likely be informative for anyone taken in by his previous lobbying efforts:

As a former healthcare admin whose spouse still works in healthcare, I'm the first to admit that there is extensive room for improvement in Canada – no sugar coating here. But surgery + all the pre apts/tests/imaging + follow up + fancy soap for $7 is a mighty fine thing.

This. When I travel through USA it’s the first thing people ask me about when they find out I’m from 🇨🇦. Have spent many hours disproving misinformation about our healthcare system. My aunt had stage 4 cancer, was diagnosed and in surgery within days, plus ICU for a week = $0

You have to wait that long here in the States too. I get biannual MRIs, have gotten them for over 20 years. I can't count how many times I've had them scuttled and had to reschedule. I've had MRIs that were rescheduled a YEAR from the original date.

If this chart can't convince someone that American healthcare is broken, nothing will. pic.twitter.com/BY0pNLikbX

If there is something to be learned from COVID, it’s that no one can be healthy if their neighbors are not. Healthcare for all.