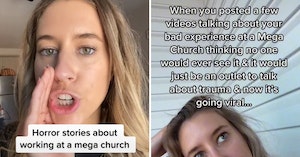 A woman who used to work at a megachurch that she is not yet comfortable naming has made a TikTok account specifically to share her “horror stories” about working there and how they treated people, and her videos are already going viral.

In one particularly popular video, she talked about how the church leaders tasked her with filling the front row for the broadcast of the services, and got in trouble once because the people she chose didn’t look the part.

“The reasons they wanted the front row full was just for looks,” she says. “It was just so that it looked full on the broadcast, the simulcast. We were always told to fill it with people who were volunteers, and people who wouldn’t act crazy in the front row or do something weird.”

As it turns out, the front row was not just a “weirdo-free area,” but was to be reserved for those of a certain social class, and definitely not for disabled folks.

“So there were three volunteers that had some mental disabilities, as well as they were from a rougher part of town and didn’t have a lot of money,” the TikToker continued. “So their clothes were kinda dirty and messy, but everyone loved them, they were so sweet and really nice. So I would put them on the front row, and I got reprimanded for doing that. Because the way they looked, and because they didn’t fit the vibe.”

Nothing says Jesus Christ like hiding disabled people and the poor in the back where nobody can see them because they might make the church look bad, right? Nobody thought to buy the volunteers some nicer clothes to wear to church instead of just blatantly discriminating against them?

Megachurches don’t exactly have a reputation for being the most Christ-like in their operations, or really having anything at all to do with what the man preached. It’s hard to come across one that doesn’t immediately reveal itself to be a money-making scam headed by people who live in mansions, drive luxury cars, beg their parishioners to buy them more private jets, and generally hate the poor.

The TikTok user, Lexi, posted her first video just last week introducing herself and asking if people would be interested in her stories. She admits to formerly being “part of the problem” when she worked at the church, and also expressed fear over what her old churchmates would think of her and whether they would “come after” her for sharing the truth.

Her next video has already gained over 2.2 million views.

In other videos, she talks about the lead pastor being treated as unquestionable, a little like a deity, perhaps, and everyone feeling like they couldn’t question him on anything. This is pretty standard for any evangelical Christian church, as are the “modesty” conversations she speaks on in a more recent entry.

Lexi further says that her experience at the megachurch didn’t shake her faith, but it did have a negative effect on her mental health. She remains Christian, but speaks out against Christian nationalism as well as those who are clearly only using the religion to enrich themselves.

Other TikTok users who have worked at megachurches are now sharing their own experiences in the comments.

“Favorite part of being on staff at our church was how we had special seats next to pastor for larger donors,” wrote one user. “Best decision was leaving the mega church.”

“Oh I have so many stories too!” said another. “They moved my bf to a back classroom (he checked in kids) because he didn’t fit the ‘image of health and beauty.'”