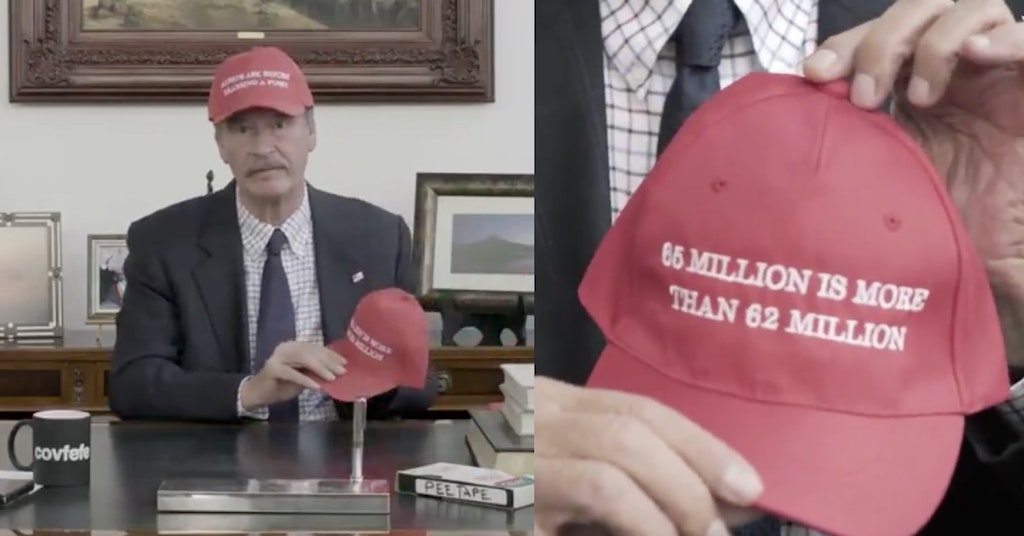 Vicente Fox, the former president of Mexico, has made no secret of his disdain for Donald Trump over the years. He was a major critic of Trump’s plans for a border wall between Mexico and the U.S. from the start, and held nothing back when mocking the president’s claim that Mexico would somehow be paying for it — something that obviously did not end up happening.

With the election drawing nearer, an old video from 2017 in which Fox jokingly announces his intent to campaign against Trump in the 2020 election has resurfaced. And unfortunately, it’s just as timely as ever.

The particular clip that’s gone viral again features Fox showing off a number of red MAGA-style hats he had made up for his own campaign.

“I have ordered five million of these: ‘Always Ask Before Grabbing A Pussy,’” he said, holding up the hat in question.

And that wasn’t the only Trump-mocking hat Fox put on display. He also had one that read “65 Million Is More Than 62 Million,” in reference to Trump losing the popular vote, “Putin Is Not My Papi,” and two particularly low blows with “Trump Has Baby Fingers” and “Not Afraid Of Stairs.”

The love for all the shade Fox was throwing at Trump was palpable as the clip recirculated around Twitter.

The entire video is just as good as this short clip, so take a break from serious politics for just a moment, watch the whole thing, and have a laugh. We really, really have to take them where we can this year.