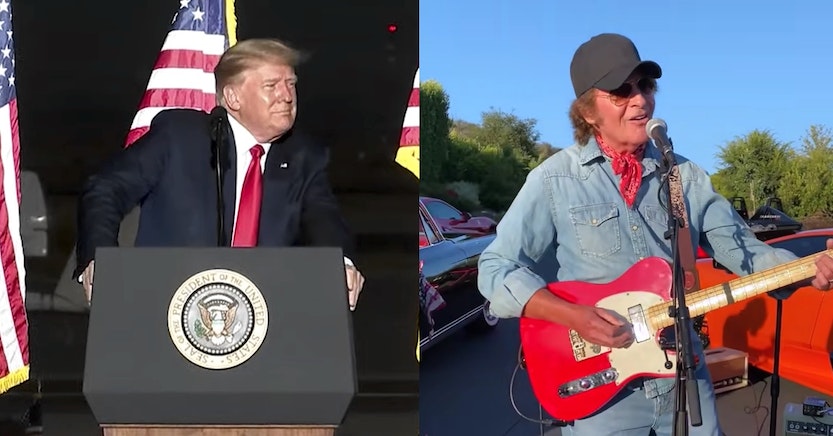 It seems as though just about every time Donald Trump uses a recognizable song at one of his rallies, there’s some sort of backlash. Even if musicians wanted to be associated with him, which the vast majority of them obviously do not, whoever picks his music keeps going with songs that are so blatantly against everything he represents as to be laughable, were we not in the midst of a disastrous and swift decline as a nation.

And the latest is, without a doubt, one of the worst offenders.

Whoever chose “Fortunate Son” by Creedence Clearwater Revival to play as Trump disembarked from his plane to enter his rally likely only heard the words “Hail to the Chief” in the first verse before pumping it over the sound system.

And that was a mistake.

Creedence Clearwater Revival’s John Fogerty, who wrote the song in 1969 after he had been drafted and served in the military, actually sat down and recorded a video to explain the song’s pretty obvious meaning, since it seems to be going right over Trump’s head.

“Back in those days, we still had a draft, and something I was very upset about was people of privilege — in other words, rich people, or people that had a position — could use that to avoid the draft, and not be taken into the military. I found that very upsetting that such a thing could occur, and that’s why I wrote Fortunate Son,” he said.

Of course, it’s well known that President Trump used his connections to dodge the draft for the Vietnam War on five different occasions, essentially exemplifying the type of person Fogerty was writing about in this song.

The musician went on to condemn Trump’s Bible photo op in Lafayette Square, saying his misuse of the military in that instance to attack American civilians for his own gain was actually the kind of garbage he was referring to when he wrote the first lyrics:

“Some folks are born, made to wave the flag
Ooh, they’re red, white, and blue.
And when the band plays ‘Hail to the Chief’
Ooh, they point the cannon at you.”

“It’s a song I could have written now,” Fogerty continued. “And so I find it confusing, I would say, that the President has chosen to use my song for his political rallies, when in fact it seems like he is probably the fortunate son.”

The dissonance is so blatant that some are actually convinced whoever picked the music did it to troll Trump.

But it’s just as likely that Trump and his people genuinely believe this is a good way to connect with his fanbase who firmly believe that this president is as patriotic as it gets, and “draining the swamp” of the con artist elite that the song trashes.

Nothing makes sense anymore and irony is dead, so it’s anybody’s guess. But one thing that is very clear is that “Fortunate Son” was not made to celebrate people like Donald Trump.