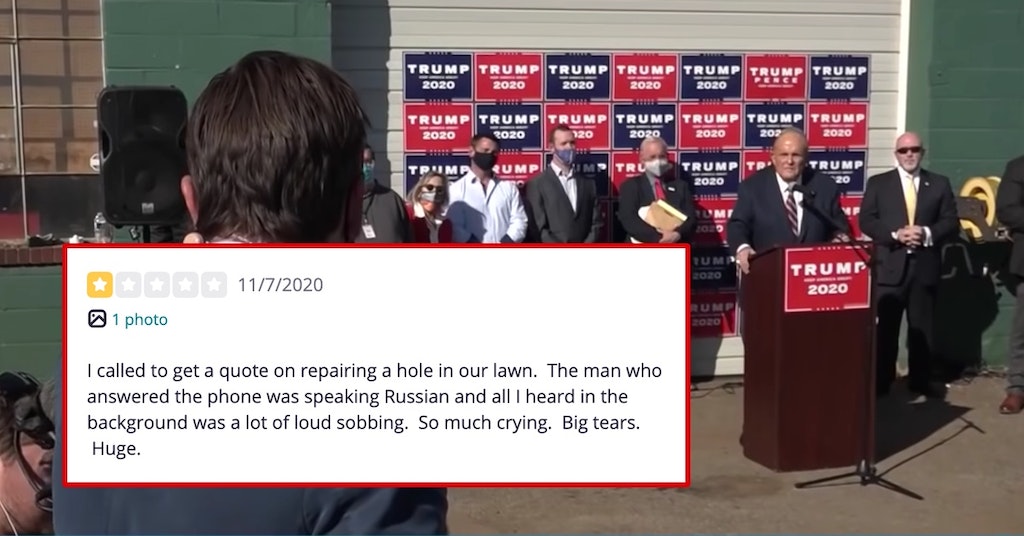 
The internet isn’t ready to let go of the Four Seasons Total Landscaping fiasco. And as it’s basically the funniest thing to have happened all year, if not all century, that seems perfectly reasonable.

If you’re not up to speed, the gist of it is that Rudy Giuliani held a press conference at a landscaping company on the outskirts of Philadelphia, possibly after mistakenly booking it instead of the Four Seasons Hotel. The tiny little landscaping office is positioned directly between a sex shop and a crematorium, one of the speakers was a registered sex offender, and the internet will probably never run out of jokes about the whole thing.

Unfortunately for Four Seasons Total Landscaping, their Yelp review page has been completely decimated by fake reviews ever since. Most of the reviews are one-star, with people knocking them for allowing Giuliani to stand in their parking lot, reiterating the Trump administration’s baseless claims of mass voter fraud that somehow cheated Trump out of the presidency while giving Republicans the Senate and gains in the House of Representatives.

“Their landscaping is beautiful,” one reviewer wrote. “Their choice to play a part in the dismantling of American Democracy, not so much.”

Of course, Yelp has become privy to the sort of review bombing that happens any time a business suddenly ends up caught in the middle of a controversy, and they’re already monitoring it for fakes and issuing a warning for any potential customers that might actually be looking for a landscaping company in the Philadelphia area.

So with that in mind, we might as well enjoy some of the ridiculous reviews while they’re still here, as part of the Four Seasons Total Landscaping saga we will pass on for generations.

New reviews have been temporarily disabled on the page, as they should be, but there are still quite a few reviews up for the time being. Don’t forget to check out the ones that “are not currently recommended!”