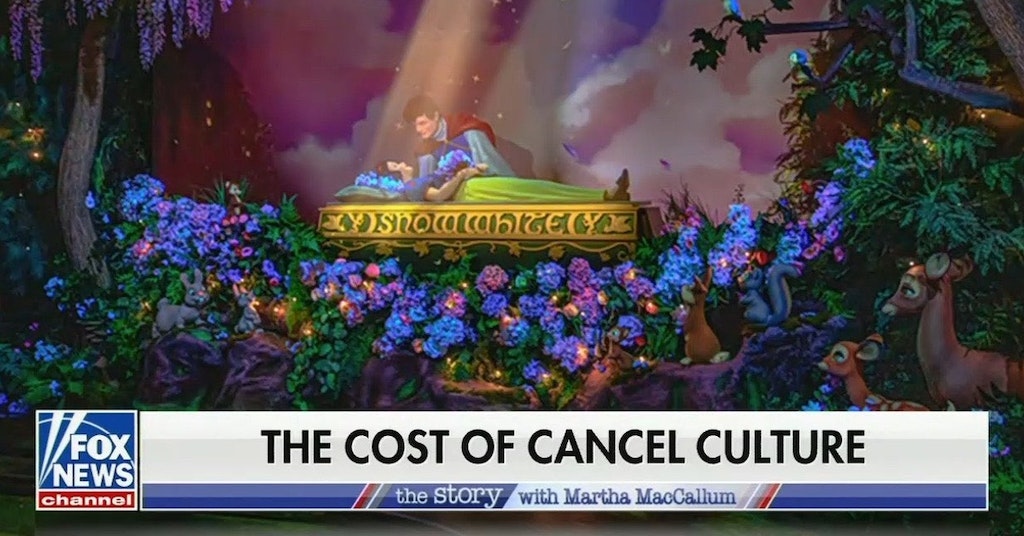 
Republicans believe the “woke mob” is trying to “cancel” Snow White following an update to a Disneyland ride, a brief discussion about consent, and Fox News devoting way too much energy to something that wasn’t even an issue.

The popular California theme park reopened following the pandemic last Friday, with some updates having been made to its attractions during a year of closures. One of these includes a revamping of what was formerly known as Snow White’s Scary Adventures into Snow White’s Enchanted Wish, which now includes Prince Charming saving Snow White with “True Love’s Kiss” while she’s still asleep, much like in the movie itself.

As SFGate points out in their largely positive review of the updated ride that seems to have kicked off the whole controversy, there have already been many conversations surrounding the issue of consent in older Disney films.

“[T]eaching kids that kissing, when it hasn’t been established if both parties are willing to engage, is not OK,” reads a line in the review. The piece goes on to question why Disneyland would update the ride to include “such old-fashioned ideas” of what’s acceptable, particularly in light of their decision to remove problematic content from other rides.

It’s a valid line of questioning and one that doesn’t overwhelm the rest of the, again, largely positive review. But it didn’t take long before Fox News decided it meant liberals were trying to “cancel” Disneyland and Snow White, dedicating entire news segments to the drummed-up controversy.

According to The Daily Beast, Fox News mentioned Snow White getting “canceled” nine times on Monday morning and Fox Business Network hit the topic five times in the same period.

One of those segments saw Tomi Lahren zigzagging all over the board, barely taking a single breath as she went from denouncing the imaginary cancelation of Snow White to insisting it’s a parent’s job to teach their children, not Disneyland, to demanding that liberals focus on “actual sexual harassment” instead.

“At the end of the day, they’re just searching for things to be offended by,” she claimed, with no self-awareness whatsoever.

Fox has already proven that they’re going to spend the year dedicated to claiming liberals are trying to cancel things, regardless of facts, in an attempt to paint them as an irrational mob that will come after everything Republicans love, so seeing a Snow White ride become the latest iteration of that game is exhausting, but not surprising.

If the folks at Fox are really concerned about people trying to get Disneyland canceled, they’d probably have better luck checking in with this guy who went viral for an entire article complaining about how they’re ruining his park-going experience by trying to consider what might upset other guests that aren’t him and adjust attractions accordingly. But nah, that would conflict with Fox’s existing agenda.