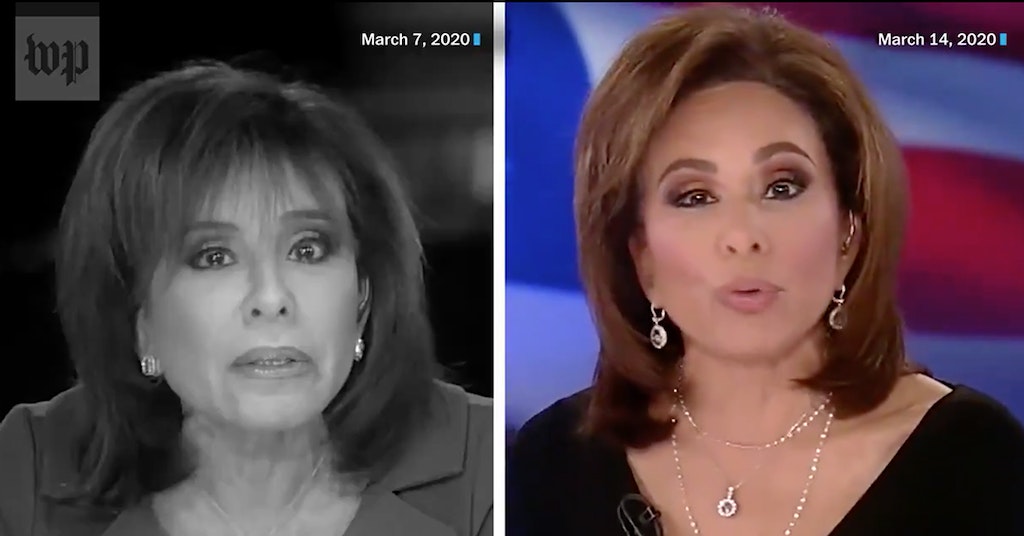 Anyone not sucked into Fox News can see how it is a tool of the presidency and the GOP, spreading misinformation to suit their own agenda. But even they have woken up to the fact that COVID-19 is real, it’s serious, and it’s here. They’ve only woken up to it in the last 3-5 days, though. The Washington Post’s video team assembled clips of various Fox News anchors and talking heads, then edited them side by side with a date stamp, showing just how drastically things flipped.

March 9th: “This is yet another attempt to impeach the president and sadly they care very little for any destruction they leave in their wake.”

March 13th: “We must test for the virus in order to stop the spread of it and what could be a very great recession some predicting even a depression.”

March 17: They warn viewers “we don’t have immunity to the virus.”

We see Fox News tell people it’s the best time to fly, that this is partisan politics, that it’s an attempt to undermine the president. Then we see them do a complete reversal.

What a damning indictment of Fox News from the Post video team here. pic.twitter.com/r8Fz8vo5KV

The footage isn’t necessarily surprising people, but it is still mind-blowing:

Also why does Trash Regan look like Glamour Shots Melania? Remember those pictures girls would get professionally taken back in the 80’s where they put on way too much makeup and slapped some Vaseline on the camera lens?

Fox News should be charged with manslaughter.

It's completely insulting, isn't it? All of the backtracking? Like we didn't hear what they said two weeks ago, like we can't READ tweets (or go back and retrieve them.)

No, they lead Trump. He watches for instructions.

According to the Post, amongst all of these hypocrites, at least one Fox pundit did believe the hype early on. At the beginning of last week, Tucker Carlson told viewers, “It is definitely not the flu.”

He continued in a monologue that seemed directed at the president saying that “none of our leaders helped us to take it seriously…People you trust, people you probably voted for, have spent weeks minimizing what is clearly a very serious problem. It’s just partisan politics, they say. ‘Calm down. In the end, this is just like the flu and people die from that every year. Coronavirus will pass, and when it does, we will feel foolish for worrying about it.’ That’s their position…But they’re wrong.”