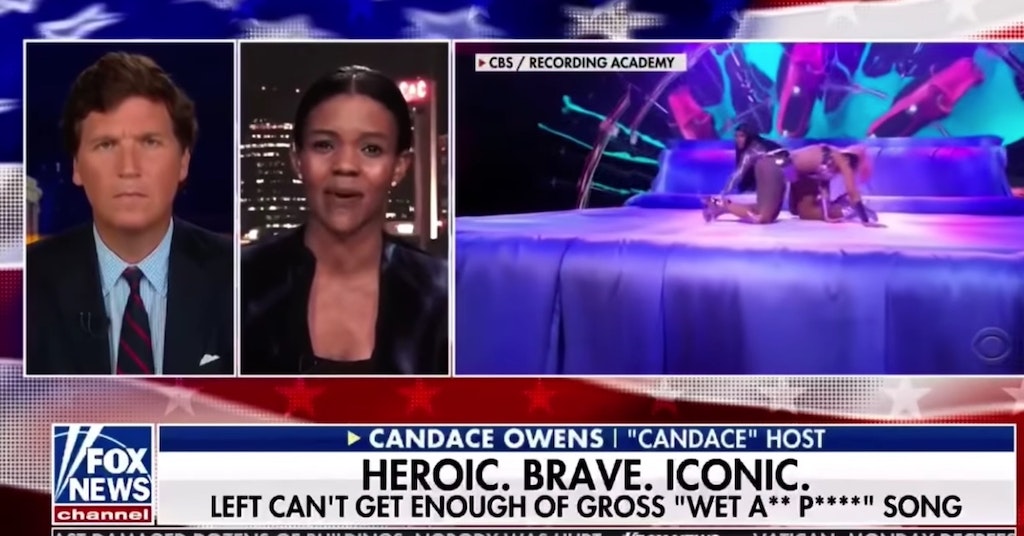 After spending the last several weeks lamenting how “cancel culture” is ruining America, Fox News briefly turned its attention to criticizing the Grammys instead.

Tucker Carlson and Candace Owens were appalled by Cardi B and Megan Thee Stallion’s performance of “WAP,” which absolutely nobody made them watch.

“Virtually, what we were looking at last night was a lesbian sex scene being simulated on television,” Owens complained, “and this is considered feminist.”

Now, if you’re already opposed to the existence of “WAP,” which both Carlson and Owens are, even a censored performance of it isn’t going to sit well with you. But the visual performance itself wasn’t necessarily any more shocking or sexual than award show performances by artists in the past.

Men and women have both always danced provocatively at these things—sometimes together—and worn outfits that reveal as much as they cover. The only real difference here are possibly the lyrics (the most “shocking” of which are censored) and the fact that Cardi B and Meghan are both women.

Either way, the claim that this is simulated lesbian sex is hilarious and was obviously designed to make Fox News viewers clutch their pearls and keep tuning into the network.

As was Owens’s next claim: “This is starting to me to seem like it’s not even left or right, it’s not a political issue. This seems like an attack on American values, American traditions, and you’re actually actively trying to make children aspire to things that are grotesque. We are celebrating perversity in America.”

Fox News’ decision to juxtapose their crusade against “cancel culture” with a denouncement of “WAP” seems to have gotten the desired reaction from many of their viewers.

Of course, the things Fox has claimed liberals “canceled” were merely things that companies decided to stop producing or change on their own, or things that people expressed frustration with or outrage over online—the same as Carlson and Owens are doing with the Grammys.

The whole thing is ridiculous enough that even Cardi B chimed in — a few times.

Throwing Owens’ own words right back at her, there are many people who believe Fox News is “an attack on American values, American traditions, and…actively trying to make children aspire to things that are grotesque.”

Maybe it’s time to cancel it.