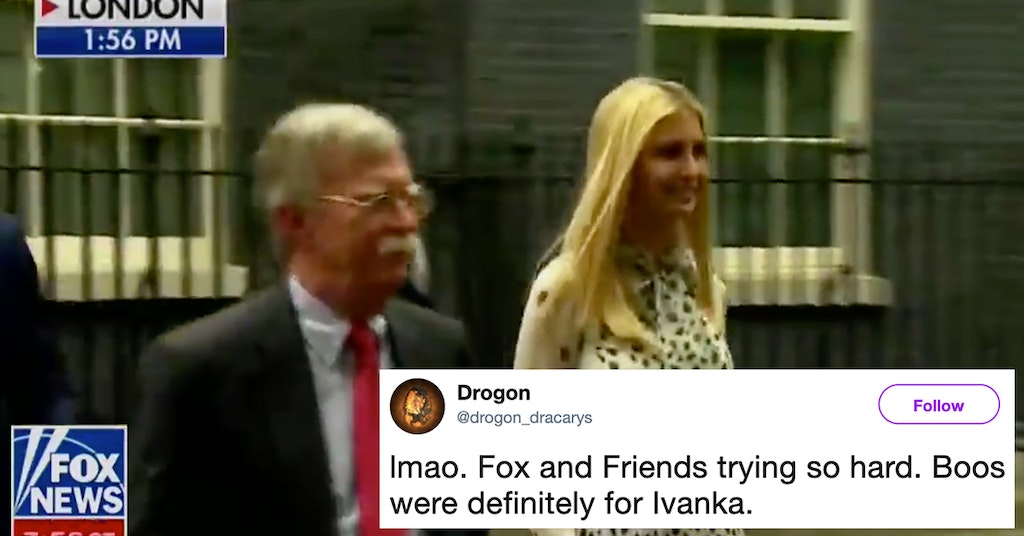 As Senior White House adviser Ivanka Trump exited 10 Downing Street last Tuesday to attend a joint press conference with her father and UK Prime Minister Theresa May, the first daughter was meet with a loud chorus of boos—a reaction that Fox & Friends said was not happening, as it was quite literally happening.

Fox & Friends host Brian Kilmeade, complaining about the coverage of Donald Trump’s UK visit by the press, argued that all other networks disproportionally focused on the anti-Trump protests and the president’s beef with London Mayor Sadiq Khan.

As he turned to concentrate on the live scene as Ivanka and National Security Adviser John Bolton left the building, co-host Steve Doocy pointed out the very audible jeering coming from the crowd, at which point Kilmeade instantly jumped to Ivanka’s defense to say that the boos weren’t actually even for her. (They were.)

WOW — huge boos for Ivanka and John Bolton when they emerge for the news conference!

“That’s not for Ivanka, it’s for John Bolton,” said Kilmeade, adding how Bolton actually “loves it.”

“He’s pretty much looked at as the tough guy in that administration and he loves that label.”

Riiight. Bolton loves to be booed and the boos weren’t for Ivanka. Riiiight. https://t.co/qSUCxcakJF

Just minutes later, Donald Trump exited the building alongside Theresa May as a large crowd of protestors chanted “Donald Trump, go back home!” During the ensuing press conference, Trump denied this had happened.

Trump and Theresa May didn’t get warm receptions either pic.twitter.com/xDy70ro0C3

“Coming over today, there were thousands of people cheering. And then I heard that there were protestors, I said where are the protests? I didn’t see any protests,” said Trump, though he did concede: “I did see a small protest today when I came, very small, so a lot of it is fake news, I hate to say it.”

On Tuesday, over 75,000 Trump protestors assembled in London’s Trafalgar Square to voice their disapproval with the American president’s policies and visit.