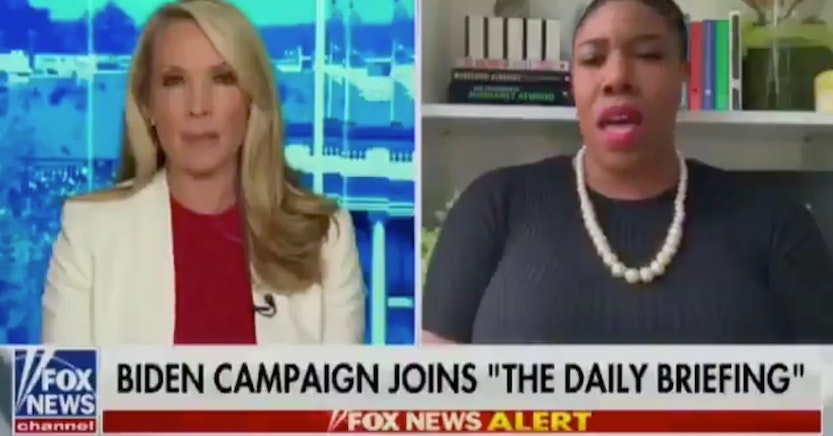 Whenever Fox News accidentally books someone who is actually competent and knows what they’re talking about, it’s a delight to the sense. In this instance of slam dunking on themselves, Fox News host Dana Perino decided to give Symone Sanders, senior adviser to the Biden campaign, an amazing opening for exposing Donald Trump’s lies during an interview on Wednesday night. For some reason, Perino decided to demand that Sanders come up with “one example of a lie” from the White House regarding the COVID-19 pandemic.

The Grio reports that the question came after Perino shared a clip of Joe Biden saying, “You can build a truly representative democracy with more facts than lies.”

She then asked for Sanders to confirm that Biden was shading Trump, who seems to love lying.

“What specifically would he be talking about?” Perino demands, adding, “I would just like even one example of a lie from the White House about the coronavirus pandemic.”

Pretty great: Dana Perino thinks she’s gonna stump @SymoneDSanders into a viral moment of being unable to name check a Trump lie on coronavirus. Instead, Symone rattles off so many that Perino has to interject to change the subject.pic.twitter.com/FxN1q2Uf8K

That’s really all Sanders needs to get the ball rolling.

“Everyone that wants a test can get a test,” Sanders offers. “How about that lie? Because everyone who wants or needs a test in this country is not able to access testing. How about all the governors have the PPE and the ventilators that they need? We know that’s not true. There are folks in places from California to Michigan to Florida and in between who are sewing masks for front-line workers because they don’t have the proper PPE.”

Sanders suggests she could go on, but says, “I don’t want to take the whole interview to run through them.”

“No, I don’t either,” Perino responds, maybe because someone is shouting in her earpiece.

It’s a pretty satisfying encounter to watch, based on Twitter feedback:

Wanna see someone step on a rake? https://t.co/F3whbP3HqE

She thought she could freeze her up for a second and move on making her look bad. But that what happens when a FOX host talking head gets for trying to out think a smart black woman.

a) claim Trump doesn't lie
b) underestimate the rest of us https://t.co/467eSUonfL

The only problem with this interview is that Fox News viewers enjoy being lied to.