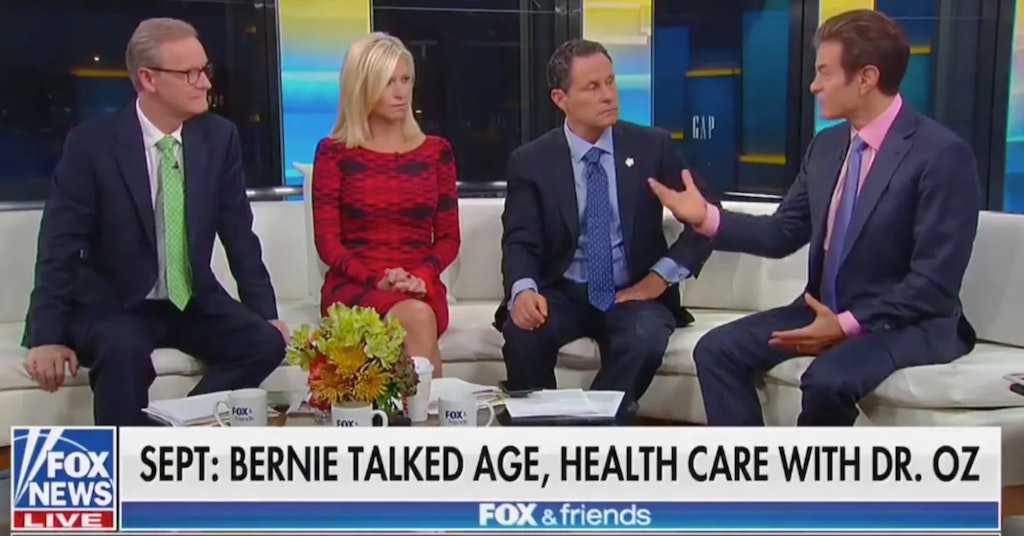 Fox News Quickly Cuts Off Dr. Oz As He Praises Medicare For All

On Thursday morning, everyone’s favorite celebrity quack medical professional, Dr. Oz, hit up the Fox News studios for an appearance on Fox & Friends. He was giving comments on Bernie Sanders’ recent procedure to have stents put in his heart, and while he was at it, he voiced support for medicare for all, a big no-no on the ultra-conservative couch.

Sanders himself tweeted about the importance of healthcare for all Americans following his procedure on Wednesday, revealing that he felt lucky to have great health insurance to cover what was certainly an extremely costly procedure and insisting that that same standard of care should be available to all citizens, regardless of their ability to pay.

Thanks for all the well wishes. I'm feeling good. I'm fortunate to have good health care and great doctors and nurses helping me to recover.

None of us know when a medical emergency might affect us. And no one should fear going bankrupt if it occurs. Medicare for All!

“Thanks for all the well wishes. I’m feeling good. I’m fortunate to have good health care and great doctors and nurses helping me to recover,” he wrote. “None of us know when a medical emergency might affect us. And no one should fear going bankrupt if it occurs. Medicare for All!”

It’s not a particularly revolutionary idea that healthcare is a right, not a privilege, but it is to Republicans and hard right-wingers, who seem to believe that if you’re not rich, you basically deserve to die. That’s why, when Dr. Oz piped up in support of Sanders’ tweet and claimed that “half of the doctors in America want Medicare for All, that’s how much of a crisis we have,” he was promptly shut down.

Discussing Bernie Sanders' tweet about his heart stents, Dr. Oz says that "half of the doctors in America want Medicare-for-all," at which point Brian Kilmeade interrupts him with "that's a whole different conversation." (h/t @tylermonroe7) pic.twitter.com/AivYV1x9uN

That’s it—Oz couldn’t get another word in about socialized healthcare because Fox & Friends wasn’t having it. Sure, that’s not what the show was about, but it’s a massive issue affecting millions of American lives on a daily basis.

That being said, Dr. Oz was speaking facts—a poll performed by Medscape in early 2019 found that 49% of doctors really do believe in Medicare for all. Unfortunately, we know how little Fox News appreciates people bringing facts to their network, so it’s no wonder they didn’t want to talk about that.