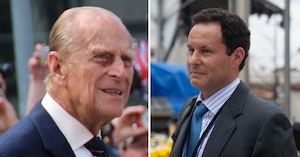 Multiple Fox News hosts have responded to the news that Prince Philip died after living close to two decades past the average human life expectancy in his country by blaming Meghan Markle and, to a lesser extent, Prince Harry.

Brian Kilmeade and Steve Doocy both speculated that the couple’s Oprah interview must have put additional stress on the very old man while he was struggling with health issues related to being nearly a century old.

“He’s in the — your grandfather’s in the hospital,” said Kilmeade. “You know he’s not doing well. Is this really the time you have to put out this interview? And evidently, it definitely added to his stress.”

This blaming of Markle for every problem that has plagued the British royal family since the public learned her name is exactly the kind of racism that led her and Harry to leave the family and do the interview with Oprah, so “evidently” it was Fox News that killed Prince Philip. Or maybe he was just a very old man.

Fox News and other right-wing media outlets have tried to paint Markle as the problem and as some sort of aggressor in this family drama in spite of the fact that Prince Harry was far more critical of the family in the interview, while Markle has spent so much time and energy praising the good aspects of the royals. Doocy in particular named Markle first when laying blame on this couple for Philip’s passing.

“He was admitted to the hospital within the last two months and was there for a very long time. And people were worried about his condition,” he said. “And this was about the time the Meghan Markle, Harry interview was about to run with Oprah Winfrey, and it was suggested that it was inappropriate that they run that particular, you know, tell-all, which invariably, you know, ultimately did accuse the royal family of racism.”

Kilmeade even speculated that Harry might not attend his grandfather’s funeral, but if he doesn’t, it might be because the media is ready to demonize his wife no matter what she does, as is outlined succinctly in a tweet by political podcaster Alex Andreou.

Placing the blame on a Black woman for the death of a 99-year-old man whom she is only related to by marriage has been so obvious and so predictable that the Twitter jokes are already multiplying.