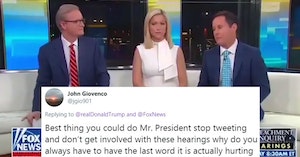 Everyone knows that Donald Trump watches Fox and Friends religiously, probably during his “executive time” and sometimes while he’s on the phone giving interviews. It’s even been speculated that the Fox and Friends hosts may sometimes try to influence Trump with what they talk about, knowing he’s watching and that he has appeared to take their suggestions to heart multiple times.

This morning, they’re promoting one message in particular to the president: Stop tweeting.

“I just think overall, the president should just ignore this whole thing,” said host Brian Kilmeade. “Don’t tweet during it, don’t get outraged over it. It ticks you off. There’s so much for him to do, I just think let these guys like Doug Collins and company fight it out and keep it on the straight and narrow for the Republican perspective.”

This suggestion comes on the tail of a round of accusations that Trump’s tweets about former ambassador to Ukraine Maria Yovanovitch constituted witness intimidation.

Everywhere Marie Yovanovitch went turned bad. She started off in Somalia, how did that go? Then fast forward to Ukraine, where the new Ukrainian President spoke unfavorably about her in my second phone call with him. It is a U.S. President’s absolute right to appoint ambassadors.

That was another “even Fox News thinks so” situation. At the same time, Laura Ingraham also suggested Trump shut the tweet up during her segment on Monday.

“Now if I were Trump, I wouldn’t even talk about impeachment,” she said. “I wouldn’t tweet about it, I wouldn’t dignify it.”

Translation: “For the love of God, Mr. President, please stop making things worse for yourself by tweeting about the impeachment inquiry.”

Ingraham: "Now if I were Trump, I wouldn’t even talk about impeachment. I wouldn’t tweet about it." pic.twitter.com/xhlU6oyjGD

Trump has not stopped tweeting, however, and has in fact been in retweet overdrive for the past couple of days, furiously sharing any and all tweets about the hearings from his most ardent supporters in between calling Nancy Pelosi crazy. But at least he does not seem to have committed an impeachable offense via Twitter today.

Fox News hosts aren’t the only Trump supporters hoping to see that streak continue, however.

Best thing you could do Mr. President stop tweeting and don’t get involved with these hearings why do you always have to have the last word it is actually hurting you more than helping you everybody has advise you to sit back and watch the Circus !

PRESIDENT TRUMP, AS A CITIZEN THAT SUPPORTS ANY PRESIDENT THAT IS VOTED IN TO OFFICE BY MY FELLOW AMERICANS, PLEASE, PLEASE I BEG YOU TO STOP TWEETING. YOUR TWEETING IS DIVIDING OUR COUNTRY FURTHER. THANK YOU FOR ALL THAT YOU DO FOR OUR COUNTRY

Please stop tweeting about hearings and the witnesses, you give them talking points against you! They are failing on their own, we see it. Keep doing your job and being successful at it, that and you will win in the end!

Mr. President, the American people know you did nothing wrong. Now would you please stop tweeting about it until it’s over. Sometimes your tweets do more damage than you think and this country can NOT afford for you not to win in 2020. We need you to stay in office.

@realDonaldTrump Perhaps u should stop tweeting. I just saw on @FoxNews your tweets are damning against u & @GOP smh. Sometimes u don’t know when 2 b quiet.

If even these people think you need to stop tweeting, it’s time to put down the iPhone.