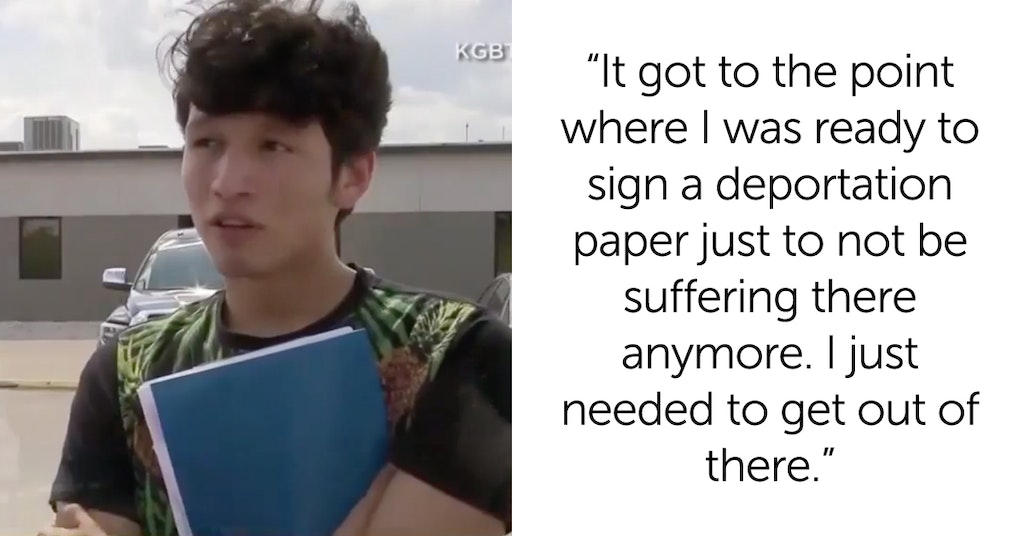 Imagine being detained by Customs and Border Protection—but you’re actually a U.S. citizen, and no one believes you. That’s exactly what happened to Francisco Galicia.

“Galicia says he lost 26 pounds during that time because officers didn’t provide him with enough food. He wasn’t allowed to shower. His skin was dry and dirty.”

The 18-year-old high school student was mistakenly held by Customs and Border Protection for 23 days. Galicia lost 26 pounds, had to sleep on the floor with only a foil blanket, wasn’t allowed to shower, and was denied access to a phone.

“It was inhumane how they treated us,” Galicia told The Dallas Morning News.

“It got to the point where I was ready to sign a deportation paper just to not be suffering there anymore. I just needed to get out of there.”

Galicia was stopped at a Border Patrol checkpoint in Edinburg, Texas while driving to a soccer recruiting event at Ranger College with his brother and friends. At the checkpoint, officers stopped him and asked him for documentation. According to the Associated Press, Galicia showed them his Texas birth certificate, a Texas ID, and a Social Security card.

But the officers didn’t believe his documents were authentic.

Never let the right get away with their “if they don’t like the conditions, go back where they came from” messaging. This man was born in Texas and was arrested in Texas, far from the border.

“The officers were just telling him they didn’t believe he was a US citizen, he was Mexican and should go back to Mexico,” Galicia’s attorney Claudia Galan said.

Things continued to get worse when Galicia and the other boys were sent to secondary screening. There, officers discovered Galicia had an old tourist visa.

“After [Francisco] was born, they went back to Mexico and [his mother] couldn’t fix the birth certificate,” Galan said. Galicia’s mother then obtained a tourist visa for him, claiming he had been born in Mexico, so that the family could travel together.

It’s a complicated situation, but what’s not complicated is the fact that Galicia should not have been detained for such a long period of time just to confirm his US citizenship.

Read the whole article. In no uncertain terms no citizen, nor any immigrant, should have to endure such inhuman conditions and have their legal rights so abused.

This is torture. As a nurse, medically it’s a crime. I’m certain no medical staff is there, just sayin. 26lbs in 3 weeks is torture, neglect & abuse.

In a dubious statement, ICE and Customs and Border Protection said they are “committed to the fair treatment of migrants in our custody and continue to take appropriate steps to verify all facts of this situation.”

While Galicia was in custody, he was kept in a crowded room with about 60 other men and one toilet. He was unable to shower for more than three weeks. He said his only meals were one sandwich three times a day.

Galicia’s Mexican-born brother, 17-year-old Marlon, signed a voluntary deportation document and is now living with his grandmother in Mexico. Galicia says he hopes to visit him in Mexico soon.

“I’m glad to have him back home, but I need my other son back,” Galicia’s mother Sanjuana said.