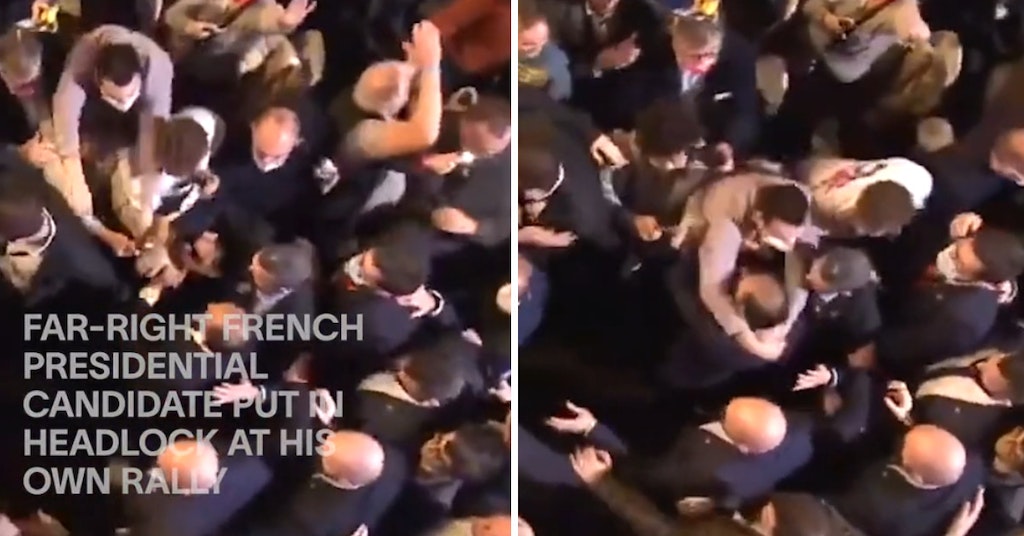 If you think things are bad politically in the U.S., you’re correct, but also they’re bad in other places, too, like in France where a far-right presidential candidate who openly says racist and sexist things was grabbed and put in a headlock while approaching the stage for a campaign rally that turned violent. The headlock was actually one of the least violent things to happen at the event, which also featured a peaceful protest put on by a French anti-racist organization that was attacked by candidate Eric Zemmour’s supporters.

Aerial footage caught the headlock in action, and though it could almost look like an unwanted hug attempt, Vice reports that the person who grabbed Zemmour was another anti-racist protester. Security immediately mobbed the individual and rushed the candidate away, who reportedly received “light injuries” from the incident, including a hurt wrist, and a doctor ordered nine days of rest for him.

Zemmour has gained a reputation as an unabashed bigot who has been convicted several times on hate speech charges and has repeatedly warned his supporters that the French people are being “replaced” by immigrants, echoing an explicitly white supremacist conspiracy theory. He has been charged several more times than he has been convicted and some of his convictions were overturned on appeal. Meanwhile, he has continued to spread hate as a cable news pundit for years until he announced his campaign for president last week.

In addition to the hate speech charges for statements that largely target Muslims, immigrants, and especially Muslim immigrants, Zemmour has targeted anti-racists in general as well as the feminist movement and has said that men are by nature sexual predators. He has been on tour since September to promote his book, La France n’a pas dit son dernier mot (France has not said its last word), which also seems to promote the “Great Replacement” theory, as a precursor to his campaign announcement.

His approval ratings have only increased as he’s gone from crowd to crowd riling them up by hating people who look and act differently than him, just like someone else we know, and this has alarmed anti-racist and other left-wing groups in France. One such group, SOS Racism, staged a protest within the recent rally crowd in which they managed to secure of row of seats so they could stand up to reveal the message “Non Au Racism” on their shirts, one letter each.

The pro-Zemmour crowd responded with much worse violence than an attempted headlock, first throwing objects including at least one chair at the activists before completely mobbing them, beating some of them while others fled for their lives.

“Our activists were present at the meeting of #Zemmour in Villepinte to say no to racism in a peaceful manner,” the organization wrote on their Twitter account. “The video, of incredible violence, speaks for itself, our activists were hit and insulted for recalling our anti-racist fight!”

One of the activists in the video was later interviewed by news crews with blood streaked down her head and face.

In spite of his alleged injuries, Zemmour went on with his speech to the crowd that night as they assaulted anti-racist activists, claiming himself to be “the only one defending freedom of thought, freedom of speech.”