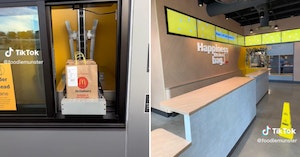 Footage of a test location for a fully automated McDonald’s drive-thru system is spreading and bringing in mixed reviews from people who would prefer dealing with a machine over an exhausted and underpaid worker but also fear what this means for the future.

Fast food giants have been working on the idea of 100 percent automated experiences for a while, with many locations transitioning to people ordering via kiosk while still having human workers in the back making the food and bringing it to customers.

The location featured by a TikTok user who goes by “Foodie Munster,” reportedly in Fort Worth, Texas, looks to have no front-end human workers at all, bringing your food to the window with a conveyor belt and ditching the indoor dining area altogether.

The restaurant interior features one of those order kiosks and a counter with no one standing behind it as well as a row of TV displays hanging on the wall. One human can be spotted behind some glass windows, but it’s unclear what their role is in the store, if any.

According to The Street, the Forth Worth restaurant is around half the size of most McDonald’s buildings and has no dining area. The empty counter, with no chairs or stools in sight, seems to be for delivery app orders to be picked up by drivers. The idea is to make the fast food experience even faster and supposedly easier than ever before.

“At McDonald’s, we’ve been setting the standard for Drive Thrus for more than 45 years,” said senior director of global design and restaurant development Max Carmona in a statement. “As our customers’ needs continue to change, we are committed to finding new ways to serve them faster and easier than ever before.”

It’s not clear how the location will deal with errors in the order or other common problems that could arise, not to mention the high potential for any of that machinery to malfunction. It does sound like there will still be humans making the food in the back, as companies have yet to figure out how to safely and effectively get robots to cook even simple meals like burgers and fries.

Still, this site makes it possible to get your McDonald’s order without having any human interaction if you take the drive-thru route. This eliminates a lot of jobs traditionally performed by human workers, further leading to fears that there will no be enough work to go around in the near future.

The inside also looks like it’s going to be one of the creepiest places on Earth late at night. Even in the daylight, that shop looks like a liminal space.

A good number of TikTok users expressed approval at the idea of this step forward in fast food automation, looking forward to avoiding “attitude at the counter” and suggesting that this will increase the accuracy of their orders.

“Good!!” wrote one commenter. “So the prices can go down and my order will be correct.”

There is no actual reason to believe that prices will go down as a result of automation, as they certainly haven’t so far, and under capitalism, cost-saving measures nearly always put that money directly into the pockets of the CEOs.

Over on Reddit, people seem to be a lot more skeptical that this will result in a better experience, and dread what this will mean for already struggling workers and the economy as a whole. They’re also not sure that robots will be any better at getting their orders right.