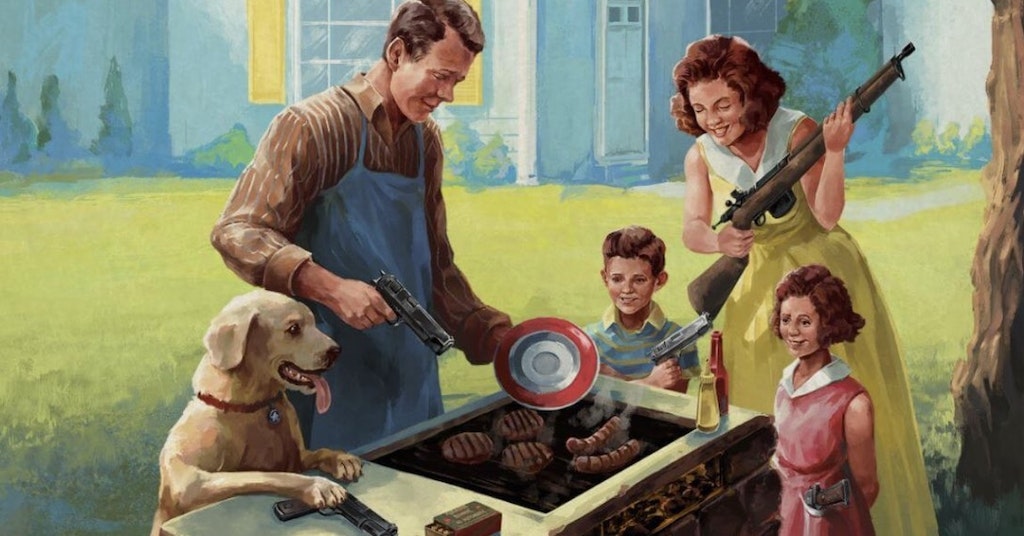 
After Parler went offline, Gab became one of the “free speech” sites ready to step in and take their place among far right-wing users who believe moderation is censorship and sites like Facebook and Twitter are out to get them.

And like Parler, it’s been a little bit of a mess. Last week, Gab got hacked, resulting in a massive data breach that exposed users’ private data and eroded trust in the site. As if that wasn’t reason enough for the rest of the world to decline to take Gab seriously, on Saturday, they tweeted this:

It’s hard to know where to start mocking. Is it dad threatening to shoot the burgers? The dog getting his own gun? The little kiddos proving they’re way too inexperienced to even hold deadly weapons — actually that one’s probably just disturbing.

Maybe it’s simply the idea that this is the image of America that needs to be maintained. But no matter what you focus on, “ridiculous” doesn’t even begin to cover it.

The actual picture used is from a parody virtual reality game called “The American Dream” by Samurai Punk, which mocks America’s obsession with guns by requiring the player to solve every problem using them.

Yeah, they used a satirical image to rile up conservatives to protect the American “way of life.”

To say Gab got dunked on for such a laughable tweet is an understatement.

In fact, Gab got dunked on so hard for the tweet that of course they ultimately tried to insinuate they knew it was absurd and were simply baiting the mysterious “them,” which one could assume refers to liberals, or perhaps just people with common sense.

You really can’t make this stuff up.