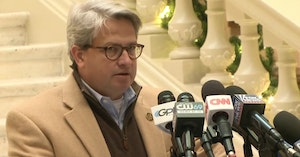 “It Has To Stop”: Georgia Election Official Begs Trump To Denounce Threats Of Violence

Nearly a month after the election, the ire from supporters of President Trump over his loss remains hot. Many of them still believe his baseless claims that the election was stolen from him, that there was rampant voter fraud all in favor of Biden, and that he will still, somehow, come out ahead and remain president.

One top Republican election official in Georgia, Gabriel Sterling, has had enough.

All this anger, he says, has resulted in a parade of threats lobbed against election workers in his state who are simply doing their jobs, and he wants Trump and other members of the GOP to speak up.

These things have been going on since the early on in Trump’s contesting of the election results, but what ultimately pushed Sterling over the edge was when the president’s supporters took these threats beyond elected officials and their families.

“A 20-something tech in Gwinnett County today has death threats and a noose put out saying he should be hung for treason because he was transferring a report on batches from an EMS to a county computer so he could read it,” he said.

Trump has continued to vehemently push his claims of voter fraud, pointing his finger at anyone other than himself over the loss, even as his own Attorney General says there’s no evidence supporting his claims.

And after the way Trump has acted over the past four years, it seems unlikely that stepping up now and personally making even the strongest condemnation of the threats and potential violence his attacks have provoked would be taken seriously by his most ardent followers, who believe he’s playing an extremely complicated chess game that involves sending them secret messages underneath what he actually says.

Still, many were pleased to see Sterling stand up the way he did.

And the recount in Georgia continues.