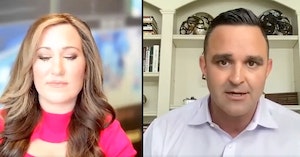 Although many people opposed to abortion in the United States seem to waver when it comes to pregnancy via rape or incest, a Republican running for office in Michigan is making his stance disgustingly clear.

Garrett Soldano is hoping to become the next governor of Michigan, a position currently held by Democrat Gretchen Whitmer. Clearly aiming for the ultra-conservative vote, he stopped by “Face the Facts” podcast recently to make a case for not only forcing rape victims to carry pregnancies to term, but to “inspire” them to appreciate their situation.

“I get it. There’s a lot of situations out there when you talk about rape and everything else, and hey maybe they deserve an abortion,” he told host April Moss. “We’re always going to fight for life.”

He went on to tell a story about a friend who he says was adopted and discovered as an adult that he was a product of gang rape. Although it initially “tore out his heart,” the man eventually came to “appreciate and understand what his birth mother went through.”

Apparently in Soldano’s view, because this woman decided or was forced to go through with a pregnancy created under horrific circumstances, that means anyone pregnant by rape can and should do the same — and be grateful for it.

“What we must start to focus on is not only to defend the DNA when it’s created, but however, how about we start inspiring women in the culture to let them understand and know how heroic they are? And how unbelievable that they are, that God put them in this moment and they don’t know, that little baby inside of them may be the next president, may be the person that changes humanity,” he said.

The argument that an aborted fetus could have gone off to cure cancer is not anywhere near as groundbreaking as Soldano seems to think it is, nor is it any better an argument than the reverse — that all babies should be aborted, actually, just in case one of them is the next Hitler-level mass murderer.

Moreover, the condescending view he has of needing to teach victims of rape that God wanted it this way and they should be grateful is astonishingly despicable, even for an anti-choice fanatic.

It’s astonishing that we still live in a society where this kind of perspective isn’t immediately laughed out of the public eye, but some who put the value of fetuses and religion over everything else are lapping up Soldano’s decision to overlap the two to justify his archaic and violently misogynistic views.