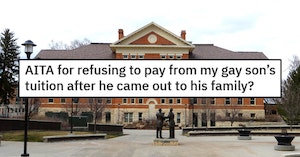 In a perfect example of how people who are outwardly supportive of LGBTQ+ folks, including some atheists, can often less on their side than they seem has emerged on everyone’s favorite Reddit forum.

The woman who posted the story, a mother of a gay college student, reached out for opinions after her extremely homophobic mother-in-law came found out about it and immediately withdrew financial support for the kid.

Now, instead of comforting her devastated son, this woman appears to be more concerned with getting her kitchen fixed than her child’s education. The problem people have with her seems to be less about the financial troubles, however, and more about the fact that OP sounds like she’s blaming her son for what happened.

This is also definitely a case of a misleading AITA headline.

“My husband and I are both atheists and support the LGBTQ+ community and were both proud of our son for coming out,” she explains. “However, my husband’s mother is a devout catholic and is extremely intolerant of gay people. She is wealthy and my children were told from a young age their college would be paid for as long as they attended a private Christian or Catholic school.”

The OP wasn’t happy about this and tried to argue with her mother-in-law to agree to simply pay for the best education available, but grandma refused. As a result, her son chose a private Christian college to attend, and these tend to be a lot more expensive than your average secular public school.

Less than two years in, and her kid made the mistake of coming out to a cousin who he thought he could trust.

“He seemed supportive according to my son, but he told his mom and dad and my husband’s sister and her husband are just are religious as my mother in law and outted [sic] my son to her. She is livid and called me and informed me she will not be making any future payments toward his tuition and told me to relay the message to him as she will no longer be speaking to him.”

Obviously the biggest jerks in this situation are the homophobic Catholic woman first and the cousin second, leaving the poor gay student without relationships with either of them and with his trust betrayed. Plus, he may now have to finish his college education by getting large amounts taken out in student loans.

Where mom enters a–hole territory is when she reveals that she and dad could help out significantly with his tuition, but the $25,000 they have saved is to fix their kitchen. She has tried to argue that serious renovations are necessary, but in doing so, seems to be placing the blame on her child for the whole situation while he’s hurting from such a huge family fallout and personal betrayal.

“My son is obviously devastated he both will not have his final year of college paid for next year and that his cousin is not someone he can trust. He now wants me and my husband to foot the bill next year. We have $25k saved up currently that we plan on using for much needed kitchen renovations.”

OP argues that they desperately need a new oven and dishwasher, but most of the money will go to “infrastructure repairs.” Her son, however, is acting like it’s just a “remodel” and thinks they’re in the wrong for not using the money on him instead.

At the end of the day, parents can decide what they want to do with their own money, and many people have to take out student loans to get through college. However, OP ended up being voted as the a–hole in this case as Redditors took issue with her appearing to work to avoid any feeling of guilt by putting the blame on her son instead of where it belongs — with the homophobes in the family.

Others, however, felt that the situation could be fixed by transferring her son to another school, or that overall OP is not exactly the jerk here for the specific situation, even if she could be more supportive.