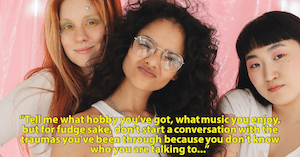 Other Generations Are Sharing Their ‘Legitimate Criticisms’ About Gen Z

While every generation defies its own stereotypes in some ways, people like to look for overarching commonalities: Boomers are selfish, Gen Xers are morose, Millenials are entitled, and Gen Z is just starting to get their own stereotypes.

On Reddit, folks are sharing some of the criticism they have of this current young generation, those born beginning in the mid-1990s. Some things people have noticed about Gen Z is that they struggle with communication, rely too much on social media, and tend to compartmentalize identities. There are of course tons of social and cultural reasons for any one generation’s reactions to their world, so let’s see what Gen Z can do and what they should be aware of.

“I think a lot of that generation is good at using technology but not at understanding how it works.” —

“We have some Gen Z students at my firm – I want to preface this criticism by saying that they are young, and still learning, and also this is all anecdotal based on the latest cohort in the firm. I would say primarily if you’re giving them directions or correcting errors that they have made, you have to use ‘softer’ language. I had a couple different students complain about an architect in the office, and the way he was speaking to them, they said he was a bully. This was very surprising to me, as this particular architect is one of the most social and friendly we have in the office. We are a small firm, no HR, so I pulled them off of his team and then I spent a couple of months covertly monitoring/ listening to the way he was speaking to his team. He was never bullying, but he is very straight forward with the way he speaks – no sugar coating if someone has made a mistake, just a straightforward correction and he can be very brusque with his instructions. I’ve switched the way we do things in the office now, so new students are always on my team (I used couched/ softer/ encouraging language with them) and then I pass them off once they get to know the ropes and grow a bit of a tougher skin. I’ve also noticed that they are all terrible at communication – I will tell them to call an engineer or someone on the construction team to confirm something/get some info, and it will literally take them half a day to make the phone call. With newer students I will do practice phone convos, and even listen in on the first few phone calls they make (if they want me to, I always offer the first few months.) Similar issue with emails, I’ve actually put together a small handbook on sending professional emails for the new students – with emphasis on the fact that they should be capitalizing and punctuating their emails (Since when did a period become aggressive?)” —

“About the phone call thing—there seems to be a general increase in phone-related phobias/anxiety and not much instruction out there on how to get over it. It wouldn’t surprise me if phone conversations eventually died out or became secluded to only the most necessary areas. I guess I’m trying to say that it probably isn’t that they don’t want to in a stubborn way; it’s that they’re psyching themselves out trying to do it. Phones don’t allow for the same visual cues like face to face or editing controls like text. Gen Z is more visually-oriented in general and that’s influencing most communication choices.” —

“Gen Z is judgmental. So judgmental. There seems to be a boomer-like tendency to find a reason to punch down whenever they can. They’ve got a knack for zeroing on the most seemingly inane things and turning it into a reason that they’re ‘better than you.'”

“Stop ‘pranking’ and harassing service workers and fast food workers for tiktok views. Nothing screams ‘I’m a piece of sh*t’ quite as loud as that.” —

“If they only knew how much damage social media does to your life. I can’t tell you how many people I know who became narcissists through Instagram, extremists through Facebook, a troll through Twitter or stupid through misinformation with TikTok. Even Reddit can be quite toxic if you don’t recognize it.” —

“Not so much a gripe as an observation. My generation (Millennial) led a crusade to get rid of labels and just let people be people. Gen Z has gone the opposite direction and created a f*cktillion labels. Funny thing is, we did what we did for the same reasons.” —

“That they’re offended on behalf of others, who may not necessarily be offended themselves.” —

“Considering how popular Tik Tok is, I worry that they are too preoccupied with how they are by perceived by other people and trying to get famous instead of just trying to do stuff that makes them happy with people they like. Their worth isn’t measured by their online presence.” —

“I’m a Millenial and the one thing I really notice about Gen Z that I think is different from other generations is they are profoundly uncurious about anything that happened before, like, 1994. Politics, history, culture, music, etc. They are simultaneously full of empathy for LGBTQ+ people and progressive on things like gender identity and mental health, but are also incredibly selfish in that they do not care about what previous generations went through or how things got to be how they are now.” —

“Most have lost the ability to ‘self soothe’… Give a Gen Z bad news that affects them personally…then take away the internet. They’ll either detach or crumble…they don’t seem to have the ability to calm themselves & recollect w/o needing outside input & support.” —

“Their lack of social boundaries and oversharing. We hired two gen-z over the Christmas period ( at different time, they never worked together) and within 2h, they had both traumadump on me, overshared personal details of their life (sexual history, family history, what they did when clubbing and getting drunk last week-end etc) and both time, I was taken aback. I am all for sharing life experiences and always down for a chat, but within the workplace, whilst we are still strangers eventhough colleagues, it bugs me. I am a firm believer than we are all entitled to our privacy. If you share your sexual history with me, don’t expect for me to share back. It is crossing the line of ‘conversation consent’ to me! Which I think is conflicting with their current moralities: they will ‘cancel’ someone for outing their mates, but won’t stop asking me about my dating history and who do I prefer, in my own workplace? They will kick off if a piece of media did not disclaim self-harming was involved but will tell me everything about their own unprompted. Tell me what hobby you’ve got, what music you enjoy, but for fudge sake, don’t start a conversation with the traumas you’ve been through because you don’t know who you are talking to, you don’t know their life and own history or political views so have some respect and self-preservation in that sense.”

“They share EVERYTHING with work. While they don’t want to be messaged or called after hours (like most normal people), they bring their entire personal lives to work. Their family life, the fight they had with their girlfriend, the cute thing their boyfriend did. All of their worries, fears, dreams, and aspirations.” —

“Millennial here: gen z does a lot of great stuff, but they are a little stuck on knowing their history. lgbtq rights, women’s rights, antiracism education, all of that is always being added to, but we cannot have it and reinvent it if we deny the trailblazers before us. Also: unless you are still fourteen, stop trying to be blasé about everything. Most gen z is like at college and they act like mainstream stuff is bad? enjoy counterculture, but don’t let it define you, because there’s nothing more annoying than a grownup with an underground complex.” —

“I’ve noticed a disturbing trend where younger people think that having to or being expected to do something they don’t want to do is oppression.”