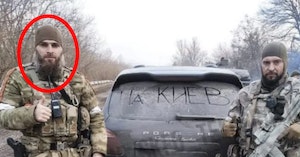 The Ukrainian Armed Forces have claimed they killed General Magomed Tushayev, a notorious Chechen general who led what was called an “anti-gay purge” in the Chechnya region of Russia, torturing and murdering people suspected of being part of the LGBTQ+ community. Tushayev was reportedly killed Saturday at the Antonov International Airport near Kyiv. The general was a pro-Putin official and was killed by elite Ukrainian forces during combat around the airport as Russian invaders attempted to take control of the area, according to reports.

“Magomed Tushayev, leader of the 141 motorized regiment of the Chechen National Guard, was killed!” the Armed Forces wrote in a tweet.

Putin and Tushayev’s “purge” in Chechnya, targeting LGBTQ+ men in particular, has been going on since at least 2017 when queer advocacy groups were alerted that Chechen security operatives were abducting and “rounding up” these men for detention, humiliation, and sometimes torture. Human rights groups in Russia confirmed to the queer publication the Los Angeles Blade that he has played a role in these atrocities, helping to kidnap a gay man in the region as recently as last May.

“Sources with Russian-based human rights organizations confirmed that Tushayev played an unspecified role as recently as May of 2021 when human rights activist and a gay man, Ibragim Selimkhanov, was abducted from a subway station in the Novogireyevo District of the Russian capital city of Moscow by four Chechen operatives and flown against his will to the Chechen capital city of Grozny,” the publication reported.

“Since 2017, human and LGBTQ+ activists noted that Chechen security operatives and other officials in the Kadyrov regime, including Tushayev sources confirmed, have rounded up dozens of men on suspicion of being gay, held them in unofficial detention facilities for days, humiliated, starved and tortured them, in what has been dubbed Chechnya’s ‘anti-gay purge.'”

Russian President Vladimir Putin himself was accused years ago of launching a homophobic campaign in order to galvanize his voter base, passing a series of laws in 2013 designed to, as the Russian government put it, ban “propaganda of non-traditional sexual relations.” This was quickly followed by a severe surge of attacks against the LGBTQ+ community in the country, driving many queer folks back into the closet to avoid harassment, imprisonment, or worse.

The current Head of the Chechen Republic, Ramzan Kadyrov, denied the news of Tushayev’s death, claiming that “we do not have one single casualty, or wounded, not a single man has even had a runny nose” after deploying his forces to Ukraine in support of Putin’s invasion.

“The president [Putin] took the right decision, and we will carry out his orders under any circumstances,” he said of the unprovoked attack on the neighboring nation.