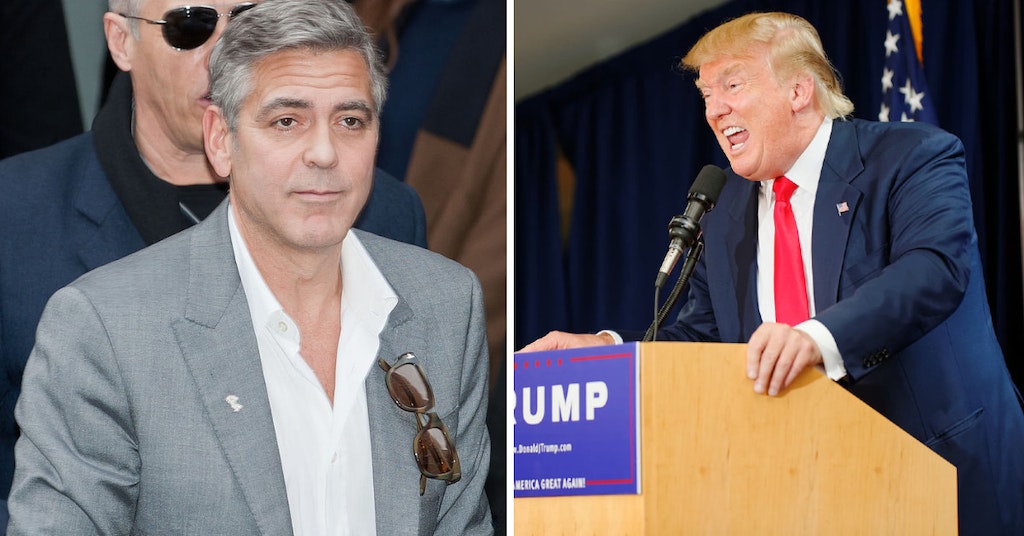 Actor George Clooney has never been much of a Trump fan, and he has made his feelings on the former president clear multiple times throughout the years in various interviews and comments, and he’s not stopping just because the man is out of office. He once again trashed the former president in a BBC interview shortly after Clooney turned down the idea of pursuing political office—something multiple actors have achieved without too much difficulty thanks to their name recognition—because he’d prefer to be happy.

“No, because I actually would like to have a nice life,” he said in the interview published on Sunday. Then it got better.

While discussing U.S. politics and Joe Biden’s polls numbers, Clooney discussed the absurdity of Trump becoming president at all, considering the fact that he had come into contact with the man before his own foray into politics, and he didn’t exactly seem like Oval Office material.

“It’s so funny, because he was just this knucklehead,” Clooney said. “I knew him before he was a president. He was just a guy who was chasing girls. Every time you went out he’d come over and be like, ‘What’s the name of that girl?’ That’s all he was.”

Clooney also expressed some bafflement on the fact that there’s a “whole group of people that they think he’s the champion of,” saying that Trump “can’t stand” the very people who worship him. As for the possibility of running again, Clooney thinks that the Florida man is going to continue to milk his political bid for as long as he can, but very much hopes that the residents of the U.S. have learned their lesson.

“My hope is we have a little better sense than to do that again.”

This latest Trump-trashing interview is potentially the reason for the resurfacing of another with the Daily Beast in 2017 in which Clooney responded to the notion that he is a member of the “Hollywood elite” that Republicans love to decry after Trump attacked him and his colleagues. The quote is once again going viral after being posted by Lincoln Project co-founder Steve Schmidt.

“Here’s the thing: I grew up in Kentucky,” said Clooney. “I sold insurance door-to-door. I sold ladies’ shoes. I worked at an all-night liquor store. I would buy suits that were too big and too long and cut the bottom of the pants off to make ties so I’d have a tie to go on job interviews. I grew up understanding what it was like to not have health insurance for eight years.”

“So this idea that I’m somehow the ‘Hollywood elite’ and this guy who takes a s–t in a gold toilet is somehow the man of the people is laughable.”

He went on to point out that Trump’s entire company consisted of only 12 people. Anyone else he needs he hires out as contractors and then very often simply does not pay them for the work. Clooney had to work with more people as a director, noting that he had to deal with “seven different unions all wanting different things,” which takes a real “man of the people” to make happen.