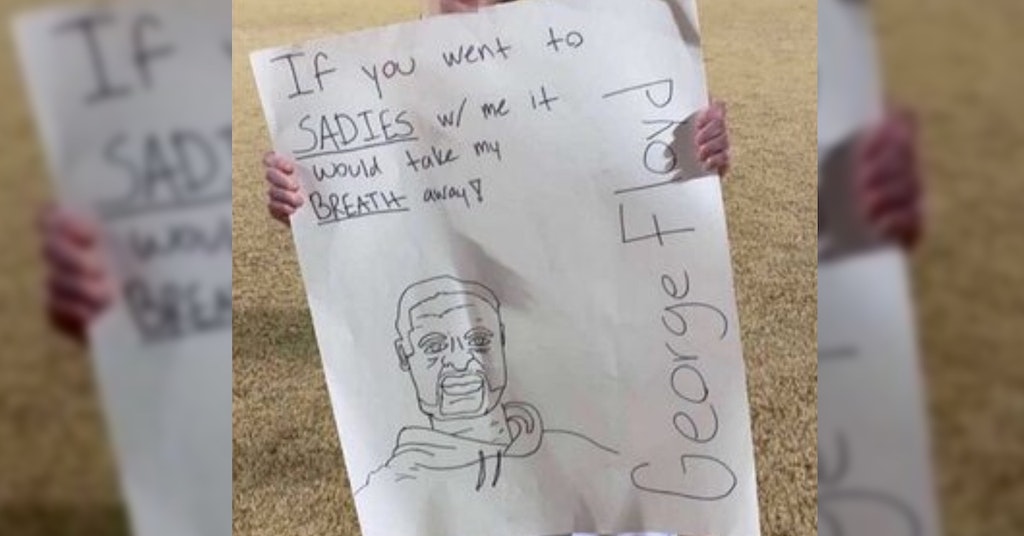 
A Nevada high school is investigating after a photo appearing to show a student making a brutally inappropriate joke about the death of George Floyd went viral.

The picture appears to be part of an invitation to a school dance. In it, a female student holds up a poster board that says “If you went to SADIES w/ me it would take my BREATH away!”

Taking up the majority of the sign is a hand-drawn picture of Floyd, with his name written in large print along the side, just to make sure the reference is excruciatingly clear.

According to reports, the student in question attends Foothill High School in Henderson, Nevada.

“Foothill and [Clark County School District] will not tolerate racially insensitive behaviors that contradict an inclusive community and impact the school culture of our students,” the school and district said in a joint statement. “We assure you the issue is being addressed.”

The repeated use of Floyd’s death at the hands of Minnesota police last May as a joke has been a frustrating and disappointing thing to watch unfold — although perhaps not surprising.

Reports of the Los Angeles Police Department circulating Valentine’s Day cards with a similar message prompted an internal investigation earlier this month. Previously, Floyd’s death has prompted calloused and cruel reenactments by teenagers for TikTok as well as by Trump supporters during their own events.

One oddity of the whole situation is that Foothill is reportedly still doing distance learning and has not held any events on its athletic field, where the photo appears to have been taken, nor do they have any dances planned.

That having been said, at this time, it does not appear that anyone has any reason to believe the photo is fake, and the original un-blurred version continues to circulate on social media.