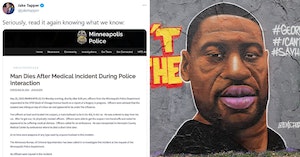 Twitter users, including well-known members of the news media, are pointing to the stark differences in the initial report by the Minneapolis police on what happened to George Floyd following the murder convictions for former cop Derek Chauvin.

What is described in the report appears now to be a far cry from what appeared to the world on video thanks to body cameras and bystanders who filmed what we can now officially call a murder.

“Two officers arrived and located the suspect, a male believed to be in his 40s, in his car,” the report reads. “He was ordered to step from his car. After he got out, he physically resisted officers. Officers were able to get the suspect into handcuffs and noted he appeared to be suffering medical distress. Officers called for an ambulance. He was transported to Hennepin County Medical Center by ambulance where he died a short time later.”

Nowhere in the report does the Minneapolis police mention the fact that one of their officers knelt on Floyd’s neck for almost 10 minutes straight. We also now know that Floyd died at the scene before he ever made it to the hospital.

Many are pointing to this example of a routine habit by police of leaving out key details and information that could make them look bad in their own version of events.

CNN correspondent Omar Jimenez pointed out in a tweet that without video technology and the internet, the Minneapolis Police Department’s version of the events leading to Floyd’s death would have been taken by much of the media and the public as reality.

“If Darnella Frazier hadn’t filmed what happened and uploaded it to social media, where would this case be?” asked Jimenez.

Some are also using this as a cautionary tale for news media itself, pointing out that many media outlets routinely report what the police say as fact without making efforts to investigate deeper or only doing so after publishing police statements as though they were fact.

In 2018, The New York Times published an investigative report which found that police lie so routinely, including under oath, that they came up with their own term for it: “Testilying.” NYPD officer Pedro Serrano referred to this as when they “take the truth and stretch it out a little bit,” but the cases the Times examined showed cops inventing all kinds of things to justify their actions, including fights that never happened, guns that never existed, and drug deals they never saw.

This concept brings to mind the case of 13-year-old Adam Toledo. The initial reports by Chicago police had city prosecutors saying that Toledo had a gun in his hand when one of their officers shot and killed him. They had to reverse this when body camera footage clearly showed Toledo raising empty hands moments before the cop opened fire.

George Floyd’s brother Philonise made a statement highlighting how the presence of camera’s made a difference in the family’s search for something resembling justice.

“To me, Emmett Till, he was the first George Floyd,” he said. “It just wasn’t any cameras around. That’s the only thing that changed—the cameras, the technology. It helped open up doors because without that, my brother just would have been another person on the side of the road left to die.”