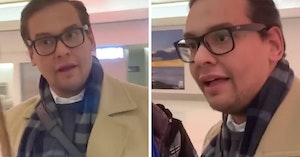 All eyes have been on George Santos lately, and a recent interaction at LaGuardia Airport suggests that isn’t likely to change anytime soon.

The GOP representative has been called out again and again for lies, questionable claims, and other sketchy behavior that has come to light following his election to Congress. He has denied accusations that have been brought up about him, even with evidence and firsthand accounts backing them up, and has allegedly been avoiding questions from his constituents.

He wasn’t able to hide from reporters, however, after he landed at LaGuardia on Saturday.

Video shows Santos surrounded as he walked through the airport, scolding reporters for not going through the proper channels and calling his office to get an interview.

After claiming he was focused on serving his constituents rather than dealing with reporters, Santos got shrill when asked if he’s actually met with any.

He then rolled his eyes when rumors that he had previously been a drag queen were brought up, saying that he just had fun at a festival while young.

Previously, Santos called the idea that he had “‘performed’ as a drag Queen” “categorically false,” despite photos showing him dressed up in drag and a Wikipedia user profile written in 2011 by a name that matches one of his known aliases claiming otherwise.

The question of whether Santos has ever performed as a drag queen feels particularly relevant considering the Republican party’s current war against that community, but also of note is that he sidestepped a question about whether his mother was in the World Trade Center on 9/11.

He had previously claimed her presence in the South Tower contributed to her later death by cancer, although immigration records have since made it clear she was not in the country at that time.

“You’re going to lose the opportunity to ever speak to me,” a frustrated Santos told reporters.