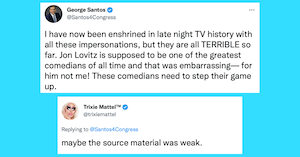 United States congressman and apparent compulsive liar George Santos has been in the news a lot lately. It seems like you can’t get through the day without a new and wild discovery being made about his duplicity — from where he went to college to the circumstances surrounding his mother’s death. (is she even really dead? Maybe she’s hiding on a secret island somewhere. Who knows!)

As a result, comedians have been making fun of Santos, including Bowen Yang on Saturday Night Live, Harvey Guillen on Late Show With Stephen Colbert, and Jon Lovitz on The Tonight Show. Santos says he has not been impressed with these impersonations, tweeting, “I have now been enshrined in late night TV history with all these impersonations but they are all TERRIBLE so far. Jon Lovitz is supposed to be one of the greatest comedians of all time and that was embarrassing — for him, not me! These comedians need to step their game up.”

Famous drag performer Trixie Mattel called Santos out on his tweet, perhaps also commenting on recent photos of Santos in drag. Santos, who has aligned himself with a political party who fears drag performers reading to children will destroy the fabric of America, said that he was only dressed in drag for a festival.

“Clearly you know all about weak acting skills,” Santos shot back, including a GIF of Mattel performing as RuPaul on RuPaul’s Drag Race All Stars — a performance in which she infamously bombed.

Mattel didn’t let that dig go without comment: “I’m not an actor!” she wrote, bringing up Santos’ own words. “I was young and had fun at a festival!”

Santos then said, “It’s all good! I won my race against the fan favorite too.”

Something tells me Santos is a big fan of Drag Race…and social media users agreed: “Girl not u being a super fan knowing the lore,” one said.

To be continued, I guess!