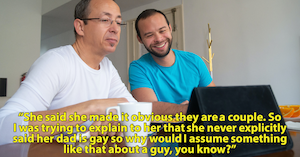 Communication is so important. And if you’re bad at communicating, get ready for a world of stupid mistakes you have to spend time apologizing for. Look, listen, and ask questions!

One Redditor who has been dating his girlfriend for a year recently met her parents for the holidays. But he didn’t realize that her parents are gay. See, his girlfriend has been referring to them as her dad and stepdad — which seems pretty clear to a lot of people, but not to the OP. So he’s wondering if he needs to apologize for his mistake.

“I’ve been dating this girl for a year and didn’t know her dad is gay when I met him and apparently I should have known and need to apologize to my gf for it. We started dating in January of 2022, so we’ve been together for a year. We met through mutual friends. This holiday season I met her family for the first time when we went to her parents for Christmas. Previous to that she had never told me that she has gay parents. I knew that her mom and dad had divorced when she was basically a baby and that her mom died when she was 13. The way she talked about it I obviously knew she had a dad and a stepdad, but I assumed her stepdad was married to her mom and her dad was just her dad.”

“So when we showed up she introduced me as her boyfriend and she introduced them as her dad and ‘Mike’ her stepdad. That was all fine but I thought it was weird her stepdad would just hang with his dead wife’s ex-husband for Christmas but I mean whatever. But as things were going I eventually realized that they were acting like a couple, from how they talked to each other you know. So when it was just me and her I was like, dude, is your dad gay? She was pretty confused why I was asking and was like, yeah? So I said, oh, like I didn’t realize that your dad and Mike are a couple because I thought Mike had been married to your mom.”

“She didn’t seem to understand why I would have thought that, she was asking why would I think that? She said she made it obvious they are a couple. So I was trying to explain to her that she never explicitly said her dad is gay so why would I assume something like that about a guy, you know? I’m not going to go out of my way to figure out if a guy is gay, that’s his business, so if she doesn’t straight up say they are together as a gay male couple then how am I supposed to have known?”

“Since then she’s just been weird about it. I can tell she’s upset but she will say she didn’t realize she had to spell it out for me so exactly, and doesn’t want to talk more about it because she will just get annoyed so I should let it go. Like I said, we met through mutual friends, and her best friend is the sister of my friend, and he has been telling me I should just apologize to her and get it over with. But I don’t know what I would be apologizing for, being dense? Not speculating about her dad’s orientation? No one really seems on my side about it though so it kinda makes me think I’m the A even if I’m not trying to be.”

“YTA. She literally introduced them as her dad and stepdad. You assumed somehow they cohabitated while being married to an unknown woman that was never mentioned or brought up. Apologize because you seem defensive and somewhat homophobic in your initial behavior. You asked and she told you. You need to let it go.” —

“I find it almost impossible to believe that in a year of dating, there was not one single context cue that her dad and step-dad were a couple. I don’t want to say you’re TA because I don’t think you did it on purpose, and maybe your GF didn’t talk about it much, but if there’s any possibility that you missed context cues because you too firmly mentally default to hetero couple assumptions, I think it would be appropriate to acknowledge that to your gf and say you learned from this experience.” —

“Your brain went thru so many mental gymnastics before coming to the most sensible conclusion that should have occurred to you the moment she introduced them as her two dads. Soft YTA as you seem to be really really dense and knows that all too well but still refuses to apologize(at least a ‘I’m sorry if my stupidity hurt your feelings in anyway?’) because you did make her upset by overreacting to the news that her parents are gay and alienating the whole situation.” —

“A conversation can go in so many directions and interpreted in so many ways. I deal with this with my job all the time and while I am an SME in my subject matter and work with other SMEs, there are a lot of assumptions. Assumption from the speaker and assumptions from the listener and interpretations /what is glossed over can always cause some misinterpretations out of some of the most benign things. So, this mix up really doesn’t surprise me. Human communications are full of mix ups. Short of ‘my dad is gay’ leaves, unfortunately, room for assumptions.” —