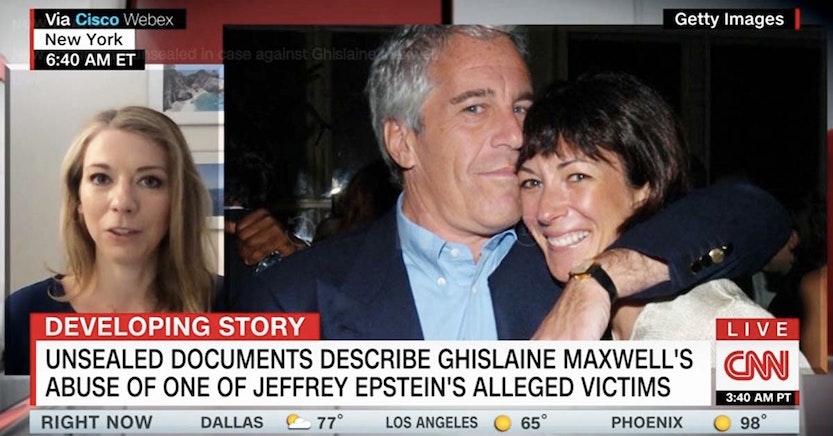 Ghislaine Maxwell is awaiting her day in court after having been charged with six federal crimes, including enticement of minors, sex trafficking, and perjury, following her arrest in early July. The former British socialite is known for her association with deceased sex offender Jeffrey Epstein, and people are waiting on bated breath to hear what potential secrets she may spill about some of the powerful and wealthy men inside Epstein’s inner circle.

Newly unsealed court documents featuring deposition from one of Epstein’s victims may provide some insight, however. In the deposition, from May 3, 2016, Virginia Giuffre describes the psychological toll she endured from Epstein’s abuse. She also alleges that she was recruited by Maxwell as a teenager as part of Epstein’s purported sex trafficking ring and that Maxwell had also “directed her” her to have sex with numerous men under the guise of “massage.”

Hmmm. We wonder who that could be?

Giuffre was also asked about her comments made to reporter Sharon Churcher in 2011, in which she implied that Maxwell had flown former President Bill Clinton into the private Caribbean island that Epstein had owned.

“Ghislaine told me that she flew Bill Clinton in,” Giuffre said in the documents. “And Ghislaine likes to talk a lot of stuff that sounds fantastical. And whether it’s true or not, that is what I do recall telling Sharon Churcher.”

“I remember asking Jeffrey what’s Bill Clinton doing here kind of thing, and he laughed it off and said well he owes me a favor,” Giuffre had previously told attorneys in a conversation recorded in 2011. “He never told me what favors they were. I never knew. I didn’t know if he was serious. It was just a joke.”

“Everyone owes him favors,” Giuffre said of Epstein’s various connections. “They’re all in each other’s pockets.”

It should come as no small surprise that the internet has been all about this tea, given Epstein and Maxwell’s connections, and what this could mean for those implicated.

Donald Trump’s friend Ghislaine Maxwell is accused of sexually abusing underage girls as young as 15. Is ANYONE surprised that Trump recently told reporters "I just wish her well, frankly.” pic.twitter.com/Yjyrk4us4d

So the Ghislaine Maxwell revelations reveal our elites are a bunch of weirdo crooked perverts blackmailed by an intelligence asset. Does anyone really need documents to realize this?

Obviously, Trump is going to grab headlines and attention on the day a judge releases more documents related to the Ghislaine Maxwell case which oversees Epstein child trafficking that implicates Trump and members of his administration past and current. https://t.co/1qkyvA1Z2W

It's nice waking up and seeing the Ghislaine Maxwell docs had dropped last night, because now I know I slept way better than @BillClinton.

I’m surprised Ghislaine Maxwell hasn’t been made a member of the House of Lords today.

A trial date has been set for Maxwell in July 2021—if she makes it that long, anyway.