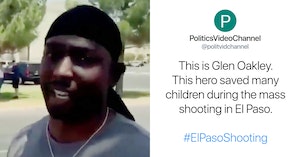 Earlier today, El Paso police responded to calls of an active shooter at a Walmart and the nearby Cielo Vista Mall. The alleged shooter, who is now in custody, reportedly opened fire on mall patrons and Walmart customers and staff killing “several” people—at least 18 so far—and injuring more.

DEVELOPING: El Paso police are responding to an active shooter near a Walmart and Cielo Vista Mall https://t.co/4YDb7WiopY pic.twitter.com/0WrMdM8CYD

Four of the victims are children.

BREAKING: A police officer said he had been told 18 adults and four children have been murdered in a mass shooting at an El Paso Walmart. #txlege https://t.co/d4sAsaxiIJ

There’s really no bright spot here, and no lesson we haven’t learned too many times at the cost of too many innocent lives, but there is at least one potential hero—Glen Oakley.

This is Glen Oakley.

He was in the @FootLocker when the El Paso shooting happened. When he ran to leave, he saw kids in the mall without their parents, scared and alone.

So he picked up as many as he could and carried them to safety.

Oakley, who told local news station KTSM he’s active duty military, says he helped get children to safety. He was in the Cielo Vista Mall when the shooting started and noticed frightened children separated from heir parents. He decided to help.

“I got my bag in my hand, so I was just trying to pick them up one by one, as many as I can and just run out,” Oakley told a local KTSM reporter.

“It was a whole bunch of kids in there,” Oakley said. “I hope nothing happened to the kids. I tried to pick up as many as I could and bring them out with me.”

Oakley credited his military training with his quick response time under pressure.

“When I hear gunshots I just think … take cover, save whoever you can,” Oakley said. “I wasn’t really worried about myself. It just brings back flashbacks of, ya know … I just hope those kids are alright, that’s all I’m thinking about right now is those kids. I’m not even worried about myself,” he continued.