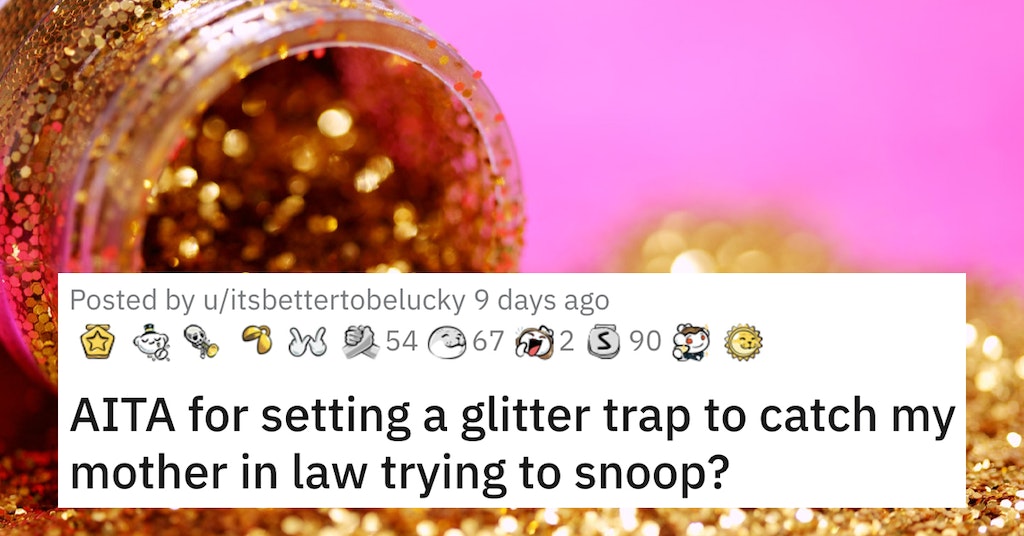 This story on r/AmItheA–hole has made an anonymous woman into a hero to a certain petty subset of the Internet. She started her story with the title, “AITA for setting a glitter trap to catch my mother-in-law trying to snoop?”

The Redditor posting under the name u/itsbettertobelucky, says she’s been having ongoing issues with her extended family and she’s now in the dog house with her husband for trying to take matters into her own hands. She writes:

For some weird reason my MIL really wants to go into our bedroom whenever she comes over. On one occasion I followed her as she went upstairs (i was going to get something for my child as the bedrooms are upstairs) and she walked past the bathroom on the main floor and up the stairs behind it. She didn’t hear me and I caught her walking straight into my room and rifling through bills on my dresser. She denied snooping (even though I’d just watched her do it) and said she was just going to use our bathroom because she couldn’t find the other ones. She walked right past the one on the main floor and another one in the upstairs hallway to go into our bedroom. Since that happened, I installed an exterior doorknob that requires a key on our bedroom door and one on the door to our office/spare bedroom.

The OP says despite the locks, her MIL keeps “forgetting” and it really “ticks her off,” but her husband thinks she’s overreacting and there isn’t a problem now that the doors can lock. But then the in-laws came over for a holiday dinner and they couldn’t find the room keys. OP was upset and her husband told her to chill, because his mom wouldn’t even try to get in.

I insisted that she would because she loves to snoop. We went back and forth and decided to cover the doorknobs in super fine glitter to see if she tried them.

I did this once before when husband didn’t believe me about the snooping to prove she’d been in the rooms. Last time she ignored the glitter and we didn’t say anything about it but then my husband couldn’t deny that she’d tried to snoop. So this time I covered the knobs in glitter and for the office went a touch further and rigged a little folder of glitter over the door to the office before the in laws came over. I left it one side unlocked (French doors) and it was set so if you walked in the room you would get covered in glitter.

Husband goes out of his way to show his mom the main floor bathroom when they got here and specifically asks his parents and sister not to go upstairs. There’s a baby gate so the kids can’t get upstairs either.

Well guess who had to go to the bathroom and got covered in glitter and had it all over their hands and hair? She completely lost it and started screaming at me so I yelled back and now my husband is saying I went too far and I’m the asshole. MIL also says I’m the asshole but SIL says I didn’t do anything wrong and MIL deserved it for snooping. FIL is Switzerland. Apparently her car is ruined now too because it’s covered in glitter that she cant get cleaned up. So AITA?

The responses are overwhelmingly in her favor, as commenters point out that it’s the mother-in-law’s own fault for going where she has been explicitly warned not to go over and over again. But a lot of them said the bigger issue was her husband, who should be on her side in all this and not forgiving his mother’s bad behavior:

In this case, AITA had a larger effect on the couple than usual. The OP added in an update that her husband saw the thread and all the comments and it was an “eye opener.” They said they’d be starting couple’s therapy soon.

She added, “And if she comes over again I will set up a camera haha or at least print out some fun fake documents so if she snoops again she can at least find something interesting :)”