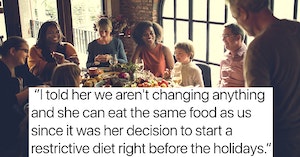 A Redditor posted on AITA using a throwaway account to ask if he was TA “for refusing to make my niece special food for our family gathering” after his sister told him her daughter was only eating gluten-free food, which he assumed was another of his niece’s fad diets.

“My wife(36) and I(38) have decided to host thanksgiving this year. My sister, Maggie(43), just informed me yesterday that her daughter, Bria(21), is now following a gluten free diet and asked if there’s anything that she’d be able to eat,” OP wrote. “I told her that Bria can eat turkey, gravy, sweet potato casserole, and pie.”

He went on, “She misunderstood and told me that there was no need to change everything for her. I told her we aren’t changing anything and she can eat the same food as us since it was her decision to start a restrictive diet right before the holidays. Maggie told me that her kid will not be able to eat most of the food and I told her that isn’t my problem.”

“She then told me that she’d be bringing some sort of special dish for her. I told her that I didn’t want to make my wife uncomfortable with her competitive bullshit, because my sister has a history of doing this,” OP wrote. “Maggie has now convinced half of my family that I’m the asshole and my wife is trying to convince me to hand thanksgiving off to someone else. AITA?”

He edited the post to add a little more context and had apparently gained some perspective from reading the comments.

“Update I asked a lot more questions after seeing half the comments mention how they got medical stuff started at this age. Bria does have a history of starting and stopping diets randomly because she’s bored so I assumed from the start,” he said. “My wife and Maggie are now working on the food together because it is a health problem and my wife has no idea where to start with that. I don’t want anybody sent to the ER over this. I’m with the rest of you in your judgement and I hear the comments calling me an asshole. I see that now.”