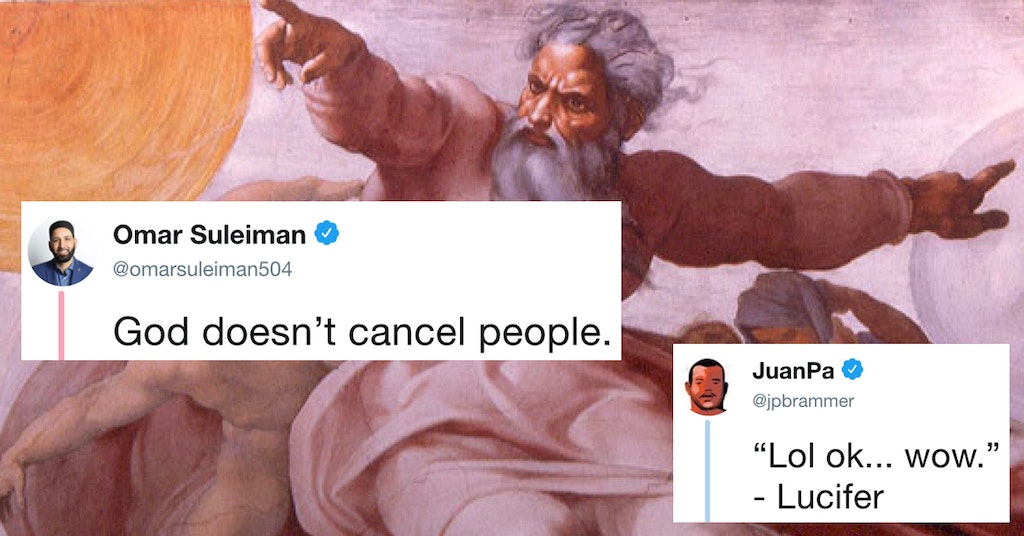 Cancel culture is a pretty complicated subject. It’s kind of a buzz phrase that is used to describe persecuting someone over an old mistake. The size of that mistake can vary quite a lot. Someone having an old Twitter joke that’s in somewhat bad taste is one thing that might become the target of cancel culture, and people will urge for them to be fired, or cast out of the popular dialogue.

But people are more often canceled over behaviors that include ongoing harm, often to minority groups, or that have allegations of abuse in their past. We can all probably think of a lot of people who fall in this category of very deserved cancellation—heck, just look at the White House administration.

People who hate “cancel culture” often seem to be afraid of becoming its target. Which is why these somewhat vague tweets about cancel culture from activist Omar Suleiman are raising some eyebrows:

Say, "O My servants who have transgressed against themselves, do not despair of the mercy of Allah . Indeed, Allah forgives all sins. Indeed, it is He who is the Forgiving, the Merciful." (39:53)

This is an interesting theological topic! How does God feel about cancel culture? Well, if we’re going to pretend God exists, I personally think any higher power is not super invested in what we do on Twitter.

Most of the time, people who are threatened with “cancellation” do just fine.

It is interesting that Suleiman mentions Brett Kavanaugh, however, because Kavanaugh is a strong example of how most powerful people escape the threat of cancel culture. He is still a justice on the Supreme Court, despite credible allegations of sexual assault. Louis C.K. is still touring and making money, though he has faced the same accusations—and admitted to them! Scarlett Johansson is still willing to work with Woody Allen.

But these tweets did open up a pretty mature discussion about who gets to decide when cancel culture has gone too far, and it’s often not the people who have actually been harmed by the person getting canceled:

We did not speak for years. Family get-togethers were rearranged to accommodate the fact she would not go to a city if I were in it. And of course this was itself after years of me delaying coming out out of fear of what my mother would do, fears ultimately well founded.

Then what does forgiveness mean? That I am barely tolerated, but still judged to be blasphemous? Or is it an offer, that if I stop being trans (go back in the closet), they will overlook what I once was?

I'm sorry she made that choice. I'm sending you a big Momma hug right now.

That heartbreaking story about the limits of religious forgiveness is just one of many. There were also people joking about how much God loves canceling people:

God canceled the entire earth besides Noah and some animals https://t.co/VpJJWbyJrt

Jesus's last words were basically "Why did you cancel me, dad?" so… https://t.co/YCKiNP5jFQ

Also, we're supposedly building up to a season finale where he cancels the whole world.

“The Book Of Cancellations”.

Wait until he reads the book of Joshua…

And that's just like in the first 20 minutes. I… what.

Suleiman has a point about how many religions promise God’s forgiveness if you just submit to him. That’s why so many people claim to have found God after getting busted doing dirty deeds. It’s unclear if he’s changed his position on how God feels about cancel culture, but he does insist he had no specific controversies in mind when he chose to share this observation:

Idk. Cancel culture, to the extent it even exists, seems pretty fair when accepting sincere apologies. Problem is they’re v hard to come by.

I'll own that. I honestly wasn't even aware of the debate with Shane Gills today (think it started after my tweet), and Allah is my witness I wasn't referring to any of the other cases right now in or out of the Muslim community. But I learned something new today. Al hamdulila

None of us are ever truly canceled. Even in hell, sinners get a lot of attention.