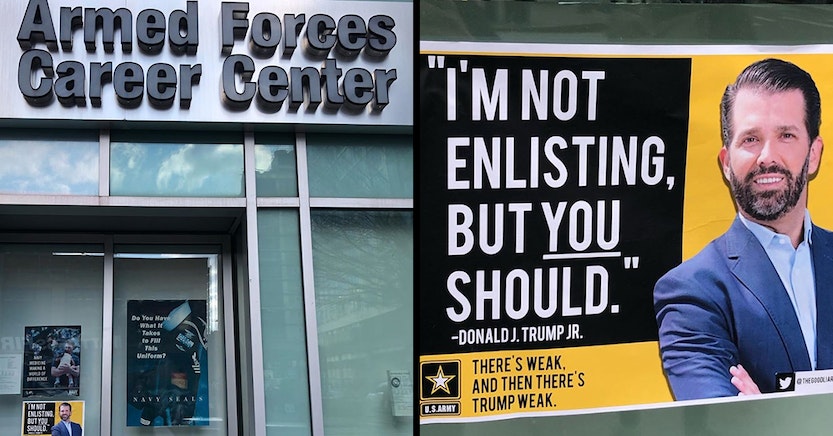 Donald Trump has been banging the drums of war, with the support of his administration, but not with the support of Congress. He made a decision to target and assassinate Iranian General Qasem Soleimani, setting off a series of hostilities between the U.S. and Iran that may lead to another war. This is helpful for the president because it distracts the country from the impeachment process that is currently working to get him out of office. Wars also make rich people even richer, so all of Trump’s cronies and donors are probably frothing at the mouth over this potential conflict.

But who goes to fight the actual war? Not the Koch brothers. Traditionally, the people who go to war are conscripted by a draft. Nowadays, the U.S. army is mostly filled with people who joined as a way to pay for college, so any war is literally fought by the poor on behalf of the rich. It’s a pretty miserable situation, and a good moment to remember this: Donald Trump was a draft dodger.

As the Washington Post reports, he deferred the draft that would have sent him to Vietnam until his graduation in 1962. Then he got out of service by sending a doctor’s note that claimed he had debilitating bone spurs in his heel. Later, he couldn’t remember which heel. A duo of artists who call themselves The Good Liars, Jason Selvig and Davram Stiefler, haven’t forgotten about Trump’s tender feet, and they’re willing to bet that his son, Donald Trump Jr., will be avoiding any real fighting, too.

They posted this sign to the outside of an Army Service Career Center, which features a picture of Trump Jr. that reads, “I’m not enlisting, but YOU should.”

We put up some #honestsigns at the Army Recruitment Center. Hopefully we aren’t going to war, but if we did, we know one guy who won’t enlist.

In smaller letters below, it’s printed, “There’s weak. And then there’s Trump weak,” as a reminder of generational cowardice. The poster is available for free download on their website, and they’re hoping folks will help spread the message. They told the Huffington Post that “in the wake of Trump’s latest reckless foreign policy actions that could very easily result in more and more troops being sent to the Middle East, we thought the public deserved a reminder of who the Trumps are.”

“They’re a family that have avoided military service on a generational level,” they added. “Don Jr. loves to fire at helpless animals and pose for pictures with them, but he’d never go to war although he’d expect others to do it.”

This isn’t the first time they’ve targeted Trump Jr. When his book Triggered was released, they made new covers for it, changing the title to, “Daddy, Please Love Me.”

We changed the cover of @DonaldJTrumpJr’s book to make it a little more honest and put them up in @BNBuzz. You're welcome, Junior! #DonnyLovesDaddy

Trump Jr. wouldn’t be loved by his daddy even if he did go to war. That would be breaking tradition.