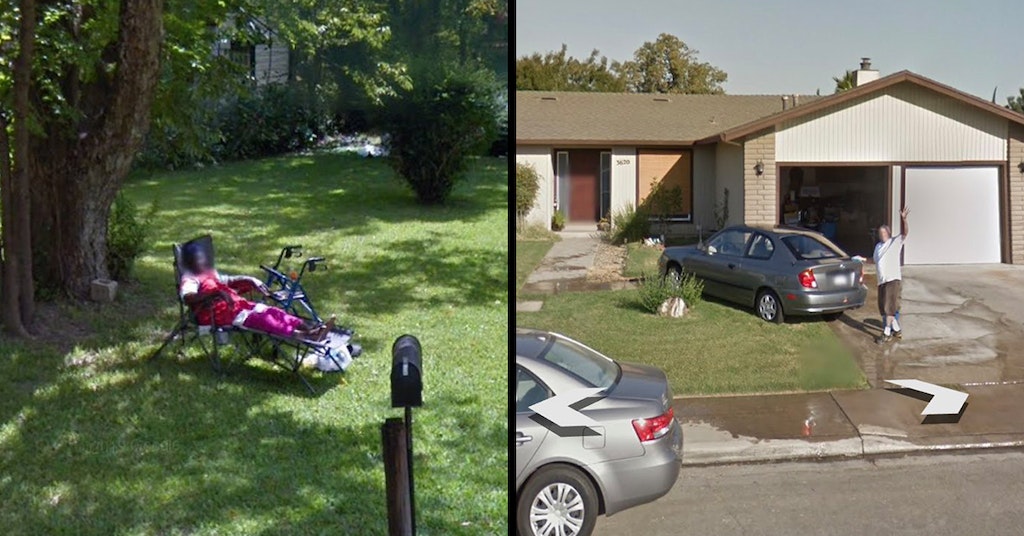 After losing a beloved family member or friend, it can suddenly seem like they’re erased from the world entirely. There is a huge sense of emptiness along with the grief. It’s incredibly hard to know that you can’t make any more new memories with them ever again, and instead have to keep going, without them.

That may be why this thread from Twitter user @yajairalyb went so wildly viral: it gave people hope that there are still secret moments of connection with a loved one who has died to discover.

In her original post, she wrote, “My grandpa passed away a few years ago. We didn’t get to say goodbye to him. Yesterday we found out google maps finally drove through his farm and as we were curious going through it, where the road ends, there is my grandpa, just sitting there.”

Then she shared a video of the screen where she moves through the Street View of Google Maps to reveal her grandfather sitting outside, looking at the road. He must have been sitting there as the cameras passed, unknowingly leaving one last glimpse of himself for his family.

My grandpa passed away a few years ago. We didn’t get to say goodbye to him. Yesterday we found out google maps finally drove through his farm and as we were curious going through it, where the road ends, there is my grandpa, just sitting there. 😭 pic.twitter.com/CbwRTkCKrZ

The story inspired a lot of other people to share their tales of discovering people they loved who they found captured by the mapping technology. The pictures serve as a little snapshot of who the person was, as they sit and enjoy the day, wash their cars, or wave cheerfully at the Google van:

Same thing with my abuelo we can see him just relaxing outside our house in Mexico. Everytime I miss him especially during this time I always go back to it 🥺❤ pic.twitter.com/sHeOb9g7s2

Omg same thing with my nana!! It’s gonna be 3 years since she passed 💗 pic.twitter.com/3Igo77fczM

my great abuelo passed away last month, exactly 1 year after my great abuela also left us. to see him here walking to our old house brings back so many childhood memories 🖤🖤 pic.twitter.com/qfDIsDQoWT

my grandma passed away in 2014❤️ found this and it made my day. she was my rock🌹 pic.twitter.com/qrj3R1CXqk

He sat in this same spot for years waiting for my mom and her siblings to come visit him because that is where the busses arrive from the city. 😔 RIP Felix Gutierrez pic.twitter.com/rmAYjGGg4H

Same with my Grandpa, it’s gonna be 3 years since his passing. This is him walking towards his daughters (My mom)!!! pic.twitter.com/3JhLIqjGcX

My grandpa is also on google maps :’/
In a couple of days marks the 4 year anniversary of his passing. They made it on the web❣️ pic.twitter.com/3dd7fDQPK4

Same with my grandma 😢almost 5 years since she passed pic.twitter.com/XnxXeFcot2

I found my tata that passed away a few years ago 🥺 pic.twitter.com/yLK5QjAF1v

I saw my uncle washing his truck outside my grandparents house 😃 pic.twitter.com/hVD3RSmeYv

Same with my grandma, walking my little sister home from the bus stop🥺💗 she passed Mother’s Day 2013 👼🏾 pic.twitter.com/rKwiCRSu5m

same with my gma. she passed away september 2019 two days after her birthday. i love this!💗 pic.twitter.com/RL4Q8a714d

I randomly googled my grandma’s address once last year when I couldn’t stop thinking of her… this was what I saw I couldn’t stop crying! My grandma was chilling in her front yard… I miss my ole gal! ❤ pic.twitter.com/1ytDswHDIO

My uncle is on there too 🥺 it’s been 2 years since he’s passed and it always makes me smile seeing him in front of our old house with my other tio ❤️ pic.twitter.com/H8g3sEsp19

They caught my grandpa watering the grass. 😊 He loved being outside. He passed away about 8 years ago. pic.twitter.com/HkWZklMaIC

Wow I’m amazed at how many of us can relate. Here’s my grandpa sitting outside his house, I have saved this screenshot for years. Rip viejito👨🏽‍🦳💞 pic.twitter.com/LRjPfNVhzz

same! was randomly looking at my grandparents house on google maps one day in 2018 and there’s my grandad outside his house cleaning up 😭 he passed away in 2014 and i didn’t get to say goodbye 💔 little things like this are so special. pic.twitter.com/xP73hJhTyg

There were also a few people who even posted about lost pets, and how sweet it was to see them again for a second, guarding their old spots:

last year i found my missing cat on google earth, i feel this so much pic.twitter.com/hb48OhmBQc

You can see my baby boy standing outside my house 🥺💔 pic.twitter.com/qw6Ug6y7dP

But one of the most touching posts was from someone who saw this thread and decided to check a special address—and discovered that their dad was waiting there for them:

Because if this thread I found my dad… it’s been almost 4 years. 😭😭😭 I never knew. Thank you pic.twitter.com/KaxTMaqXg2

You never know when someone will find a way back to you.