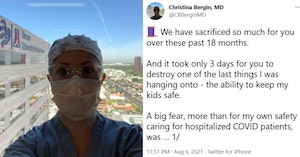 An Arizona doctor tore into U.S. Republicans for putting her children at risk by forcing schools to reopen and preventing them from implementing necessary safety protocols even as the delta variant, which is more dangerous to children and twice as contagious as the original, begins to overwhelm hospitals. In many area across the country, this new variants is causing surges in case numbers not seen since the vaccine first became widely available to the adult public.

None are more aware of this problem than our healthcare workers, exhausted from 18 months of pandemic and now watching as many of our nation’s leaders fight to make it illegal to go back to using the safety measures that were put into place when the virus first arrived. Dr. Christina Bergin has given everything she has to try and save people from COVID-19 but can no longer suffer in silence while her children are being put at risk over politics.

“We have sacrificed so much for you over these past 18 months,” she wrote on Twitter. “And it took only 3 days for you to destroy one of the last things I was hanging onto – the ability to keep my kids safe.”

Bergin’s thread has seen a surge of its own since she posted it on Friday, gaining over 86,000 likes and 24,000 retweets over the weekend. She describes how, after being exposed to COVID-19 on a nearly daily basis, she created her own decontamination routine in order to protect her husband and children from the virus and how the family vigorously masked up even after she and dad were able to get the vaccine.

“I thought about staying in a hotel. I did all the grocery shopping alone since I was already getting exposed at work. We masked meticulously when not at home.”

The local schools originally had options for virtual learning that the Bergins took advantage of when the pandemic was at its worst, and the good doctor praised the safety protocols they had for in-person learning. She and her husband also pulled the kids out of sports and canceled birthday parties to keep them safe, with Bergin understanding more than most how devastating the virus can be even if the illness is survived.

After all that, what Bergin cannot tolerate is the Arizona Republicans who did everything in their power to end virtual learning, remove public safety mandates, and force thousands of unvaccinated kids back into schools this fall. In the case of the doctor’s kids, it only took three days for them to be exposed to COVID-19 upon returning to in-person learning.

With the vaccine for kids under 12 still a ways off and the delta variant proving more dangerous to this age group, many parents are legitimately terrified in addition to being as angry as Bergin.

For this, Bergin places the blame squarely on the shoulders of Arizona Governor Doug Ducey, the state GOP, and everyone who has selfishly refused to even wear a mask in order to help slow the spread of the virus, which has an increased chance of mutating with every new infection.

“I’m deeply disappointed at how many care so little for others in their community, for their kids’ friends & family members & teachers,” she said. “That they care so little for the healthcare workers who have been beaten down over & over again for the past 18 months, but are picking themselves up to meet the monster yet again.”

Nearly three weeks ago, the Republican-controlled Arizona state congress banned school mask mandates as well as what they call “vaccine passports,” restricting schools from requiring that children be vaccinated against COVID-19 to attend in spite of other long-standing vaccine requirements. The bill implementing these bans is already being resisted by multiple school districts in the state, and as a result one district has already been sued by an anti-mask teacher.

Meanwhile, things are getting so bad in states where vaccination rates are low that hospitals are once again warning that they’re nearing capacity for COVID patients and the city of Austin just sent out an emergency text alert to residents warning them that the situation is getting dire. Doctors like Bergin are exhausted to the point of collapse from doing all that they do while begging people simply to wear a freaking mask.