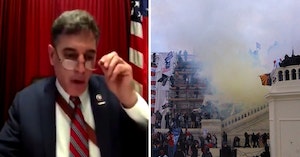 Trump-supporting Republicans appear to be going for the historical revisionism strategy on the January 6 assault on the Capitol just a couple of months after it happened, with Rep. Andrew Clyde of Georgia comparing it to a heavy tourist day.

He and other Republicans insisted that the rioters were “peaceful” in spite of mass amounts of video and photo evidence showing the kind of fighting with cops and property damage that they would condemn as violent if it were a Black Lives Matter protest.

“There was no insurrection, and to call it an insurrection, in my opinion, is a bald-faced lie,” said Clyde. “Watching the TV footage of those who entered the Capitol and walked through Statuary Hall showed people in an orderly fashion staying between the stanchions and ropes taking videos and pictures. You know, if you didn’t know the TV footage was a video from January the 6th, you would actually think it was a normal tourist visit.”

Clyde may be referring to a couple of isolated videos that do show some older Trump supporters walking through this area, looking a bit dazed and confused and taking photos. They may have wandered in after the Capitol entrance was violently breached and been told by rioters that they should come inside because the doors were open.

However, if you bother to watch any of the other footage from the Capitol that day, you can see people fighting with police, breaking windows, and chanting things like “hang Mike Pence” as they search for congress with tactical gear and zip-tie handcuffs. Normally, tourists don’t break into congressional offices, steal podiums, and smear poop on the walls and floor of the place they’re visiting.

Clyde wasn’t the only one who expressed insurrection denial at this particular hearing. Rep. Paul Gosar called the rioters “peaceful patriots” who were being “harassed” by the Justice Department and claimed that Ashli Babbitt, the woman who was shot by a Capitol police officer when she tried to climb through a broken window to where congress members were actively evacuating, was “executed.”

Rep. Jody Hice backed him up.

Of the five people who died during or shortly after the attempted coup that day, incredibly, only Babbitt died via violent means. Two men in their 50s died from “natural causes from cardiovascular disease,” likely meaning they had heart attacks. Another woman, age 34, died of “acute amphetamine intoxication.”

The fifth individual, Capitol police officer Brian Sicknick, was found to have died of multiple strokes after collapsing in his office right after returning from the scene of the insurrection. Though no evidence of injuries or adverse reactions from chemical agents was found by medical examiners, they did conclude that “all that transpired played a role in his condition.”

Democrats, of course, pushed back on the idea that there was no insurrection or that the protest was peaceful in any way and criticized their Republican colleagues for lying about what happened that day.

“I find it hard to believe the revisionist history that’s being offered by my colleagues on the other side,” said Rep. Stephen Lynch.

“This was a violent white supremacist mob who assaulted the nation’s Capitol,” said Rep. Ayanna Pressley. “It was a deadly and dangerous insurrection that was incited by Donald Trump.”